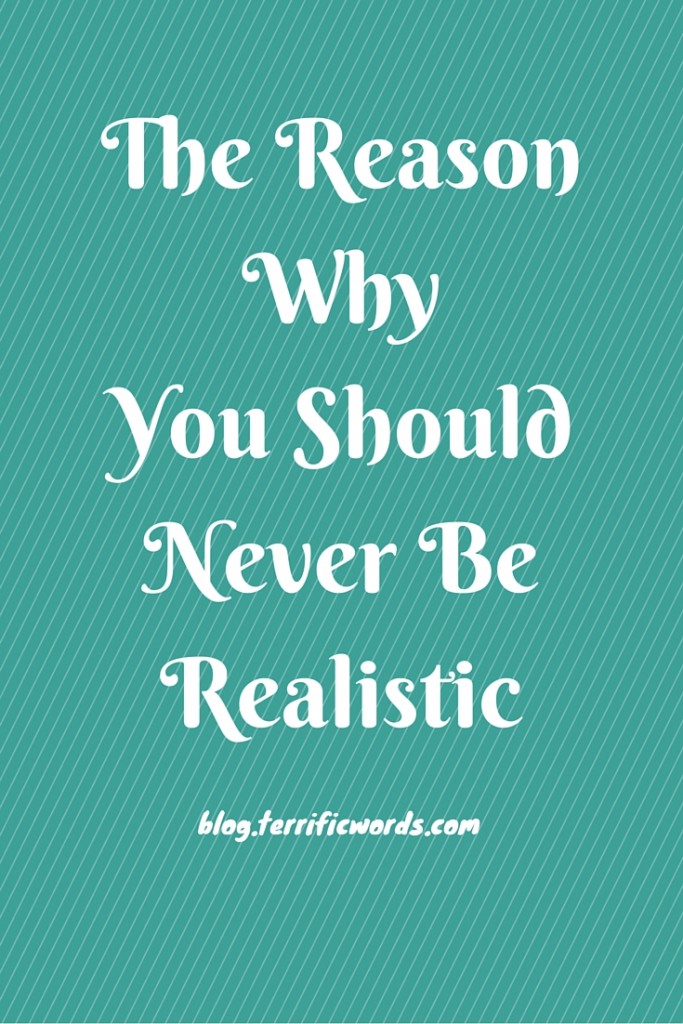 When I told a few of my friends that my plan is to be completely debt free by the time I’m 30, I got a lot of side eyed stares. Now I’d be the first to admit that it’s a lofty goal. I went to a private school that cost a lot of money. Unfortunately, the debt didn’t disappear when the late night study sessions did. So I wasn’t really surprised by the skepticism and side eyes I received upon my goal declaration. What I was surprised about were the responses I received.

“You need to be realistic. That isn’t going to happen.”

Another said, ” Yea, I agree. I’ve already accepted that it will take me 15 years to pay it off. I’m working on a plan to stick to that.”

One of them even went on to say that I was crazy for thinking like that.

They didn’t say anything cruel. In fact, their words were more detrimental to themselves than they were to me. I knew no matter what they said, I was going to stick to my goal. There was no way I would submit to the idea of being realistic.

The sad part is they thought they were giving good advice. They thought being realistic was a badge of honor to wear with pride. But I knew the truth. 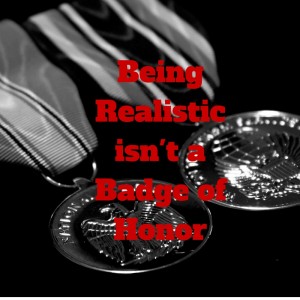 Being realistic wouldn’t do me any favors.

The only thing realism was gonna do for me was kill the chance to be great.

For my entire life I’ve never been realistic, why should I start now just because I have a lot of debt that I want to pay off?

And realism is the reason why you’ll never have a chance to live the life you imagined.

If I was realistic I would have never been able to quit my job and be a successful freelance writer.

If I was realistic I would have never graduated college with honors in just three years while working and volunteering.

If I was realistic, I never would have gone from writing college assignments to writing for national magazines like REDBOOK.

If we allowed realism to take over, we never would have had a black president.

If we allowed realism to take over, a poor woman from Chicago never would have created the highest-rated talk show in American history.

If realism took over, an adopted man without a college degree would have never been able to revolutionize technology with state of the art mp3 players, tablets, computers, and laptops.

If realism took over, one brave captain never would have allowed us to know Miracle on the Hudson.

If realism took over, a man who filed for bankruptcy at 23 would have never created one of the most visited theme parks in Florida.

None of that was realistic. That was all crazy.

Realism can’t be held responsible for any of the things listed. However, crazy can take some credit. So if my friends think I’m crazy for my lofty dreams, so be it. Turns out crazy ole me is in good company.

Thinking realistically is not a badge of honor. It’s time to kick realism in the groin and hope the bus to crazy to town.

What do you think about being realistic? Is there a time that being crazy has helped you?

TERRIfic Quip: Realism is a refund on a dream that never got a chance. 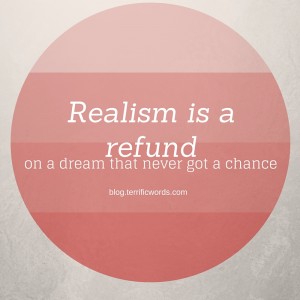