Repeat after me: The world needs me exactly as I am.

Go out and change the world

Though it was nearly ten years ago, thats what I recall to be the general message of my high school graduation speech. And while I took it to heart and vowed to live according to the words, I’m afraid I haven’t done much world changing. Despite my volunteering and pleasant disposition, I haven’t even come close to changing the world. However, I did manage to change my dress size, credit score and bank account for the worst. I had become a typical twenty-something year old – a far cry from what I set out to be. 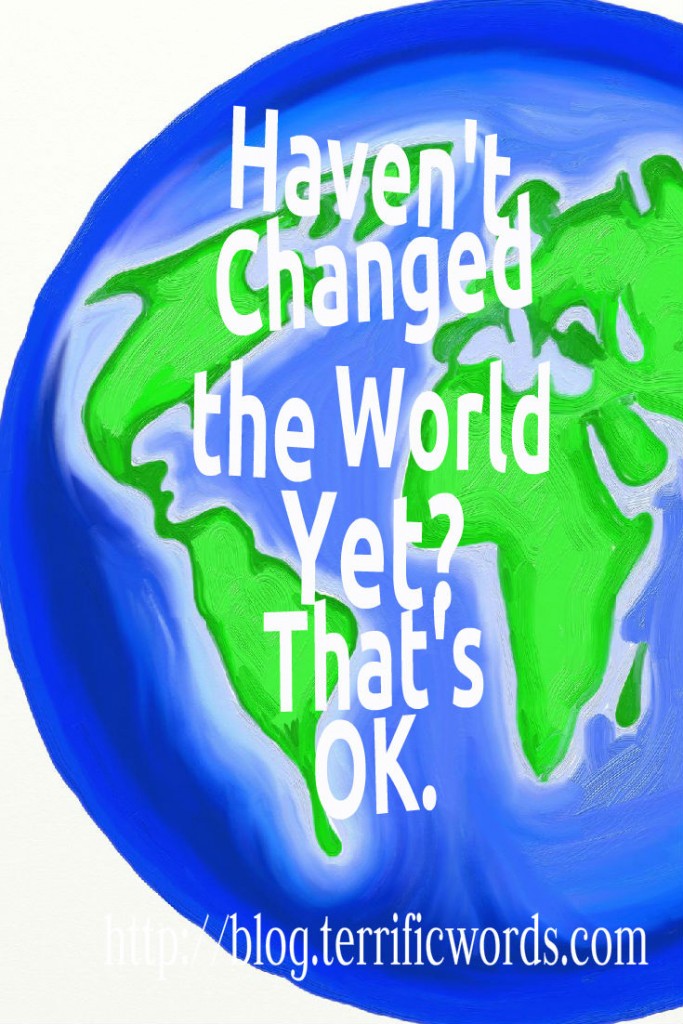 However, that didn’t stop me from proudly proclaiming that I am a world changer whenever the opportunity arose. That is until I had my eyes opened by REAL world changers. Some were teenagers that provided beds for homeless teens on the street. Others were college grads selling eco-friendly backpacks made by women in third world countries that helps their education. One was writing speeches for the president. They were creating social networking sites. And they were technology visionaries developing electronic products to be used by people all over the world.

Suddenly, the thought that I was changing the world seemed nothing but silly. In fact, all I’ve been was selfish. My day to day life revolved only around things that made me happy. I wrote for this blog, taught Zumba, and took pole dance classes. All of them made me happy. None of them changed the world. Every now and then, I donated to a cause or volunteered at the soup kitchen but that’s nothing compared to the people I listed who truly changed the world. I certainly didn’t volunteer as much as I used to.

Turns out I’m not alone in this feeling. As I talk to friends, watch the news and read blogs I found there are several people who realize they’ve fallen painfully short of changing the world. (I”m willing to bet that if you’re reading this you may be one of them.) Instead, they’ve followed their dreams of getting a higher education. They followed dreams of starting a career in a field they loved. Or even followed their dreams of getting married and starting a family. Others may dream to lead a life of passion. None of them may change the world in ways you previously thought and that’s ok because they are noble dreams that create happy lives.

And while some “real world changers” may argue that dreaming of a happy life is selfish, I’ve since learned it is the foundation to truly changing the world in ways we never knew were possible. For once we’re happy, good things will happen. They happen at work. They happen at school, and they happen within your community. When you are happy you do what you can to make others feel that same happiness. Those in your circle – your defined world – will reap the benefits and change their lives forever.

It may be minuscule compared to the technology game changers and those ending world hunger, but your ability to follow your dreams to bring you happiness gives you the power to share happiness in the world. It might not change the whole world – but it’s just enough to change the world of those in your corner.

Instead of vying to change the world, let your life’s to-do list be this:

Do those things and the world will suddenly start moving in the right direction.

Do you ever feel like you haven’t done enough to the change world? In what small ways has your happiness made a difference?

TERRIfic Quip: Your happiness is enough to change the world.