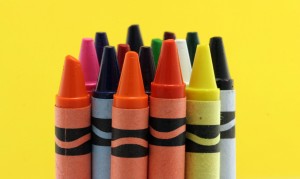 This week was dedicated to coloring outside the lines

This week in my quest to be fearless, I decided to focus on things that took my out my comfort zone as opposed to things that simply scared me. I did things that are out of my character and challenged myself to color outside the lines in the name of my fears. It’s an extremely scary thing for someone like me who always plays by the rules. Somewhere along the way I ended up just doing business related things that scared me and colored inside the lines once again. But at least, I tried.

July 25: Put myself out there. I am an EXTREMELY private person. Today I put my challenge to the max when I wrote and published my first personal essay and then promoted it. Most of the time, I write about other people when it comes to personal nature. Even when I do that, I never tell anyone what I write. I never show my friends, family, other peers, etc. I’m really not sure what I was afraid of, but whatever it was always stopped me from sharing my words with the world. I was pleasantly surprised when my personal essay received three positive comments on the website. I was even more taken aback when I told a friend of mine about the essay and she then told all her friends about it. As a result, I got several messages on Facebook from people who admired my work. I know it really isn’t a major accomplishment to most, but letting anyone close to me know about my work is a big step for me. The fact that my first attempt at being raw and personal was so well-received means so much.

July 26 – Picked up the phone. There is a medical company in my area I’ve always been interested in working with. They’re local, pay well, and are on the constant lookout for writers. The only problem is my medical writing experience is limited. I’ve tried several times to get my foot in the door by emailing, but I’ve never gotten a response. Calling has always crossed my mind, but it was nerve-wracking to think they would laugh in my face or just ban me from ever thinking about them again. Well, today I finally called. I asked to speak with human resources. While the person I needed to speak to was out of the office, I did get the contact information for him and was advised to reach out again next week.

July 27 – Unfortunately, I didn’t get to do what I wanted in order to scare myself as I was at Six Flags all day with my little sister as part of the Big Brother Big Sister program.

July 28th – Ran in my sports bra. For the past few weeks, I’ve been running several times a week using a “couch to 5k app“. After a while I started running out of clothes to work out in and my very thoughtful brother bought me yoga pants and a sports bra for my birthday. I wore the yoga pants on several occasions, but could never get up enough courage to wear the sports bra in public. I live in a community with a lot of conservative Muslims are covered from head to toe in hijab. I feared for the dirty looks of judgment I would receive if caught wearing so little while running in the park. Yet, I mustered enough courage to put on the sports bra and matching yoga pants set and went on my usual job.  Much to my surprise, no one seemed to give me a second look. Not only did I not feel judged from wearing so little during my daily run, I felt empowered. It was an amazing feeling to be comfortable in my skin.

The sports bra I wore during my routine jog

Because I didn’t have time to scare myself on July 27th, I did two things on the 28th.

Smoked a Cigar. I am a goody two shoes. I always follow the rules and rarely color outside the lines. I’ve always been that way. That’s mostly because I’m afraid of the consequences. So when my husband asked me to smoke a cigar with him in celebration of his friend having a baby, I was extremely apprehensive. It was so out of my element. But of course, when I told him I was scared he reminded that I was supposed to do it because of my year long challenge. He was right, so in honor of my blog post, I threw caution to the wind and shed myself of the goody two shoes label when I took two puffs of a cinnamon flavored cigar. While it wasn’t that bad, I don’t think I will ever do it again. It felt awkward, tasted bad, and smelled funny despite it’s cinnamon flavor. Yet, it’s a risk I’m glad I took.

July 29th- Invested in a penny stock. I am a conservative when it comes to gambling and investing. I’d rather not and say I did. After all, I work hard for my money and fear the worst when it comes to investing. But then I remembered the old adage, “Big risks equal big rewards.” As a result, I signed up for the Penny Stock newsletter, and bought 300 shares of Xumanii. While I admit, I’m on edge about investing the money, I feel a bit liberated about talking a risk that can ultimately lead to a rewarding financial gain.

July 30– Asked editor about contract. I can’t go into full detail about this one as yet due to some details that still need to be ironed out. However, I can say that I was afraid to ask about details of a contract regarding a story I wrote and so far, things are looking my way since I asked about it.

July 31 – Read the comments. It’s no secret, strangers on the Internet can be viscous. As a result, I have been terrified to read the comments of my essay once published on Huffington Post. I pictured the worse. I saw people calling me ugly, insulting my intelligence, those scrutinizing my career, amongst other things. After all, Huffington Post is notorious for those types of comments. Contrary to what I imagined, most of the comments were extremely uplifting and encouraging. Many people thanked me for sharing my story while others said they appreciated the anecdote even though they couldn’t relate. Words can’t describe how happy I am to know that my simple story had made a difference. It made me realize, that dream of changing the world really is within reach. I never would have realized that if I didn’t read those comments.

Have you do anything to break out of your comfort zone lately? How do you attempt to color outside the lines?