Repeat after me: I’m here to listen when you’re ready.

If you don’t already know, I’m a cancer. Whether or not you believe in astrology, cancers are generally known to be very emotional, sympathetic, nurturing and loyal. Because of those traits I think people are naturally drawn to me. And what does that mean? I’m always listening to someone’s life story whether I know them well or not. People from all walks of life feel comfortable telling me the good, bad and ugly about their jobs, kids, relationships etc. And every time I listen intently and feel for them. However, one thing I don’t do is tell these people to pray about it. And you shouldn’t tell people to pray about it either. 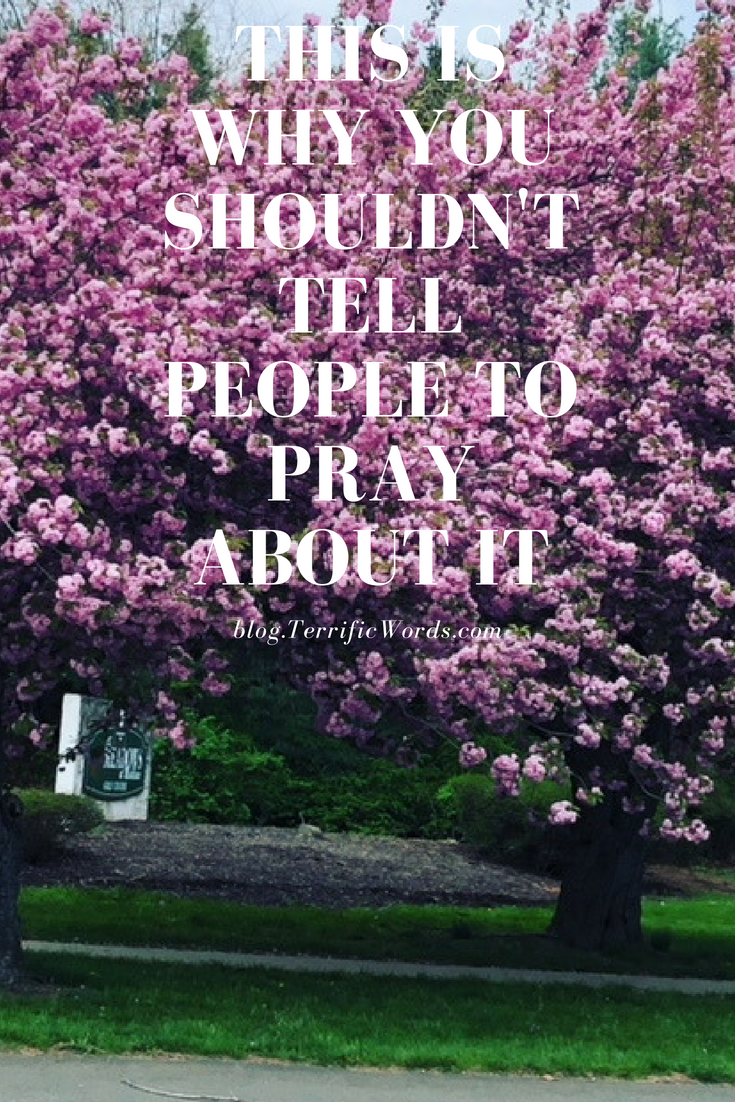 Telling people to pray when they are struggling may be doing more harm than good.

I’m a member of a few private mommy groups on Facebook in which mom’s in need ask questions about troubling situations from time to time. Whether it’s regarding issues with a child’s father, loss of WIC benefits or a child struggling with ADD the most common response is, “Just pray about it”. And I absolutely hate it.

Admittedly, responses could be worse. There could be mommy shaming, name calling, and straight up ignoring the person. Still, “Just pray about it” is  right up there with top things you just shouldn’t say to someone in need. I know because I’ve been there. Telling people, especially someone you don’t know, to pray about it, could be doing more harm than good.

I know what its like to feel ignored, dismissed and trivialized when  dealing with something difficult. Little do you now, someone suggesting that prayer was the answer to all my problems can trigger all those feelings. I’d usually walk away feeling even more defeated than before. If someone I don’t know well tells me to “just pray about it” in response to my problem I may walk away thinking the following:

“What does praying have to do with this situation?”

“I already prayed so I guess I’m hopeless. There’s still no help.”

“So you think my issue is so trivial it can be solved so easily with prayer?”

“Clearly you don’t care enough about me to offer any other suggestion than the ones you will give to any stranger.”

The list goes on and on. Of course, when it comes from someone who’s a very good friend with whom I have that relationship with, I  could be grateful for the suggestion. It could be exactly what I needed to hear at the moment. However, you never know; especially if it’s someone you don’t share a relationship with. So it’s much better and safer to avoid saying, “you should pray about it”

Most likely, the person giving words of prayer is coming from a warm and loving place. However, the recipient may not feel that way. There’s a good chance the recipient is feeling judged, ignored and hopeless.

While we’re on the tails of the unfortunate suicides of Kate Spade and Anthony Bourdain it’s important to remember that prayer is not the answer to everything. It’s a lot like those “thoughts and prayers” Facebook posts that pop up after a school shooting. It sounds nice in theory, but it’s really not doing anybody any good. Action, not prayer solves problems. What prayer can do for some people is bring them a little peace as they sort out their issues. The emphasis is on SOME people. For other people, it does absolutely nothing and makes them feel even worse than before.

The truth is telling someone to just pray about an issue is making a lot of assumptions about the person. First of all, you are assuming that the person has a relationship with some higher power and is religious. It makes the assumption the person is suffering because he or she didn’t pray and it’s somehow punishment for it.

Lastly, it’s making the assumption that the person hasn’t already prayed about it. For all you know, the person has been praying about it and feels as though those prayers are going unanswered. I know this is a controversial statement to make, but it’s important to remember religion and prayer cannot solve problems for all people. What brings solace to one person can bring heartache and trouble to another.

Additionally, when someone is struggling, it’s important to remember that the person is not you.

Maybe prayer does no good for that person because she doesn’t believe in god.

Maybe the person is having a hard time with religion in light of the recent times.

Maybe faith is the only thing keeping this person going and your suggestion that he should just pray about it because they don’t have enough faith is making them feel less than.

And maybe prayer brought her to you in asking for help… so please don’t ruin the moment by reminder her to pray about it. She could’ve done that already.

That being said there are times that the reminder to pray can help someone. But I urge you to only say it if you have to and confident the recipient will appreciate it.

Otherwise, the next time you feel compelled to tell a struggling person to pray, just don’t. I know it’s often hard to know what to say.

I’ve found saying, “I’m here to listen whenever you are ready,” is often the most helpful thing you can say to someone who is struggling.

Has anyone responded to your problems with, “just pray about it” Was it helpful?

TERRIficWords – Sometimes it’s what we don’t say that says the most.