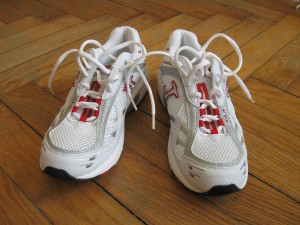 Someone once told me that obstacles are a figment of our imagination. He said, obstacles aren’t a real entity unless we make them one.  I didn’t believe him until a few days ago. Below is my story detailing how I learned about obstacles while trying to complete a 20 minute jog:

I am no track star. I can’t run long distances. When I run, my sides hurt and my breathing becomes irregular. And yet, I’ve decided to commit to running a 5k next month and train via an app on my phone.

Training isn’t easy. A few days ago the app’s schedule for the day was to run for 20 minutes straight followed by a five minute cool down period.I decided the goal to jog for 20 minutes without stopping was doable, but I had no  idea how I would make it happen. Yet, I attempted it anyway. As I made the long and tiring jog, my legs felt like rubber and my chest felt heavy. My body felt heavier and heavier with each stride. I wanted to make that continuous 20 minute jog so bad, but there were too many obstacles to overcome. As my strides got slower I kept thinking about how much my body hurt. Needless to say, I did not make my goal. While I completed the day’s workout, I stopped multiple times during what was supposed to be a continuous jog. Training for the day was a fail and I was devastated that I couldn’t complete it as planned.

During my walk of shame back to my home following my failed training, I contemplated where I went wrong. Of course, I kept coming up with blanks.  I kept thinking about ways around my obstacles regarding pain and couldn’t come up with any. Every once in a while the tidbit of information I received about obstacles being a figment of our imagination crept into my mind. But I quickly dismissed it as BS. I decided the only solution was to try again.

So the next morning, I pulled out my trusty app and attempted my continuous 20 minute jog in the hopes of completing it without any breaks. I had no idea how I would redeem myself after the previous day’s defeat, but I figured the least I could do was try. Of course, I was disappointed when not much changed as I set out on my run. My feet still hurt, my legs were still heavy and my chest still felt weak. However, I decided to put those thoughts aside and focus on finishing strong. I sang to myself, counted and repeated inspirational phrases to keep my mind off the pain of running.  I was convinced there was no way I could let an obstacle such as burning legs get in my way of finishing strong.

I was surprised when the alarm on my app sounded signaling the end of my workout. Though ecstatic that I completed the jog, I was shocked that I made it happen. After all, I experienced all the same obstacles and hinderances as I did the previous day. Other than my adamance about ignoring the pain, nothing changed.

It didn’t take long to realize that everything did indeed change. I chose to focus on the goal as opposed to the ostacles. Sure I was in pain and suffering, but that didn’t matter the second time around. I didn’t allow it to happen. I allowed the obstacles to remain in my mind so I could make my goal a reality.  More importantly, I did’t even allow the pain to be an obstacle. When reaching a goal, obstacles only arise if we allowed them to. Otherwise, they will simply remain figments of our imagination. It turned out that wise stranger was right. Our imagination is a powerful a thing. It’s about time we used it for good.

Ever notice the only times you don’t reach your goal is when you let obstacles get in the way? How do you overcome obstacles?

TERRIfic Quip: Obstacles are those silly little things we see when we take our eyes of the goal.