Since we are officially 14 days into 2014 I figured it was only fitting to reevaluate my goals thus far and reflect on my progress. Yes, 14 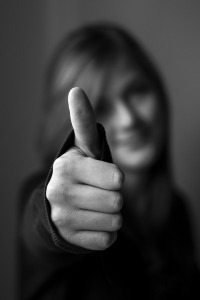 Thumbs up to a happy new year!

days may be too soon for some, but it’s never to early to figure out what’s working and what isn’t. After all, it would suck to spend six months working towards a goal only to find out you wasted your time doing something that isn’t helping you obtain it.

I’m sad to report that I realized some things haven’t gone as planned during my two week evaluation of the year. Despite declaring 2014 the best year of my life, it wasn’t going as fabulously as I had hoped. Though it may be too premature to evaluate my goals, one of which wasn’t exactly working out the way I had originally planned. And which goal was that you might ask? The goal to be the happiest I’ve ever been by being carefree and living in the moment.

I thought it was a great goal. Actually, I still think it’s a great goal. The only problem is I’m not the happiest I’ve ever been and I couldn’t figure out why. So I decided to reflect. Unlike most of America, I’m still holding on strong to my resolutions. I’ve said no to overspending in order to save more. I’ve said no to drinking sugary drinks in order to live healthier and I’ve said no to taking too many breaks so I can work harder and make more money. If I was doing everything right, what was the problem? Why wasn’t I as happy as I expected I’d be.

It wasn’t until I thought again about how I’ve been working towards my goals that I figured it out. My life had become about saying no. Though it was all for a good cause, “no” can be such a limiting and negative word that truly started to impact my life. So starting today I’m implementing a new rule. I vow to say “yes” as much as possible to get back on track to living a happier and full life. And no, that doesn’t mean I’m giving up on other goals. It’ just means I’ll be open to saying yes to more opportunities to allow myself to live in the moment. And to make my life and yours’ easier, I’ve compiled a list of 14 things we should all say yes to in 2014. Who’s ready to “yes” their way to a happier new year?!

I get it. It’s hard to admit you can’t do something on your own; especially when your dream has always been to become a superhero just like your mom and dad. However, it’s about time you recognize that saying “Yes” to help doesn’t mean you are weak. It only means you are strong enough to hold onto that helping hand even when your back is against the wall. No superhero – including mom and dad- ever got anywhere without asking for help. Even Batman needed Robin to conquer the world from time to time. Be open to saying yes to help when the need arises and I guarantee your 2014 will suddenly look a bit brighter.

If you are a US resident, I’m willing to bet you had a certain amount of vacation days and let quite a bit of them go unused in 2013. After all, we are workaholics and like the idea of being needed. Not to mention, we’re usually afraid that actually taking advantage of our vacation days will somehow jeopardize our jobs. However, the truth is sometimes taking a little vacation is good for our minds and productivity when it’s time to get back to work.

I’m ashamed to say I’ve neglected my husband more than I should for the sake of accomplishing work goals. However, that wasn’t good for me and my relationship. Then there are the times we got brainwashed by the idea that romance is dead and that chivalry doesn’t exist anymore. I say screw work and what the critics say for once. People still like to wine and dine and surprise you with romantic outings. Accept it and say yes to it. After all, what’s wrong with feeling loved everyone once in a while?

4. The chance to travel

There’s nothing better than exploring the world around you. Get lost, try new foods and learn about the culture. You will certainly feel much more enriched.

I know this may seem a bit counterproductive. However, it really is time you learn to start saying yes to saying no. Some things just really aren’t worth your time. Don’t be afraid to say no to that co-worker that won’t stop asking you for favors or the new group project that just doesn’t feel right. Learning to say  yes to saying no to these things will lift a weight off your shoulders and definitely set you on the path to happiness.

I know it’s hard; especially when you’ve been hurt. But refusing to forgive does more harm than good. Whether or not an apology is attached to it, it’s about time you learn to forgive so you can finally live again and be happy. After all, forgiveness is always more about you than it is the other person.

Trying to be someone you’re not for the sake of a job, fitting into a new group, or impressing friends is never good. Attempting to be someone else makes life feel so limited and fake. Instead, accept who you are and be happy being you. It can make a world of difference.

The simple thing to do is take the easy way out. But then how would you grow, expand your horizons or learn something new? Instead, say yes to a new opportunity. You’ll be happy to learn what you are capable of.

If the opportunity arises allow yourself to learn something new whether it be a magic trick on youtube or a new language at a community college.

10. A long phone call with a friend

Text messaging may be more convenient, but nothing compares to the live banter of a good friend during a good phone call. Plus, text messages never seem to make you feel as happy as a refreshing phone call with a far away friend.

I know we were all taught as kids not to talk to strangers, but where’s the fun in that? Take a chance and ask a stranger to sit with you at lunch.

Yes, I mean this figuratively and literally. Once we learn to make the best of every situation everything seems just a bit brighter. Plus, it’s always fun to live like a kid again and have fun playing in the puddles.

Life can be oh so boring if you live in repeat doing the same old things over and over again. Allow yourself to live by experiencing new things.

14. Knowing your neighbors. Remember the phrase – “It takes a village?”

There’s nothing fun about walking by your neighbors on the way to work every morning and barely mumbling, “Hi.” Howevr,  it’s what most people do. It’s rare to find people who actually know their neighbors. This year, take the time to introduce yourself and build a relationship. It could never hurt to have a new friend in the neighborhood.

What things have you vowed to say yes to this year?

TERRIfic Quip: Say yes and you’ll figure it out afterwards.