It’s been almost a week since we found out the winners of the historic 1.5 million dollar Powerball jackpot. That means we’ve had time to let it sink in that we didn’t wake up rich. We’ve accepted that returning to work is inevitable. It also means we’ve been busy plotting ways to make ourselves richer some other ways via investments, get rich quick schemes or pure ingenuity.

I’d be the first to admit that I’ve had my fair share of failed attempts at getting richer over the years. I’ve tried selling T-shirts on Teespring. I’ve sold items that I no longer used or simply forgot about. I’ve signed up for as many cash back sites and apps I could think of. I’ve subscribed to the coupon lifestyle.  I’ve even made some money on this blog.

Though, I did make some decent income, I wasn’t rich. I was far from it considering I was swimming in student loan debt and barely making all of my payments on time. Plus, I was still struggling to figure out how I would save up enough money to move out, plus purchase a new car. And even with all the struggle, my dream of ending 2015 richer was still alive and well in my mind despite having to drain my emergency savings account on more than one occasion. 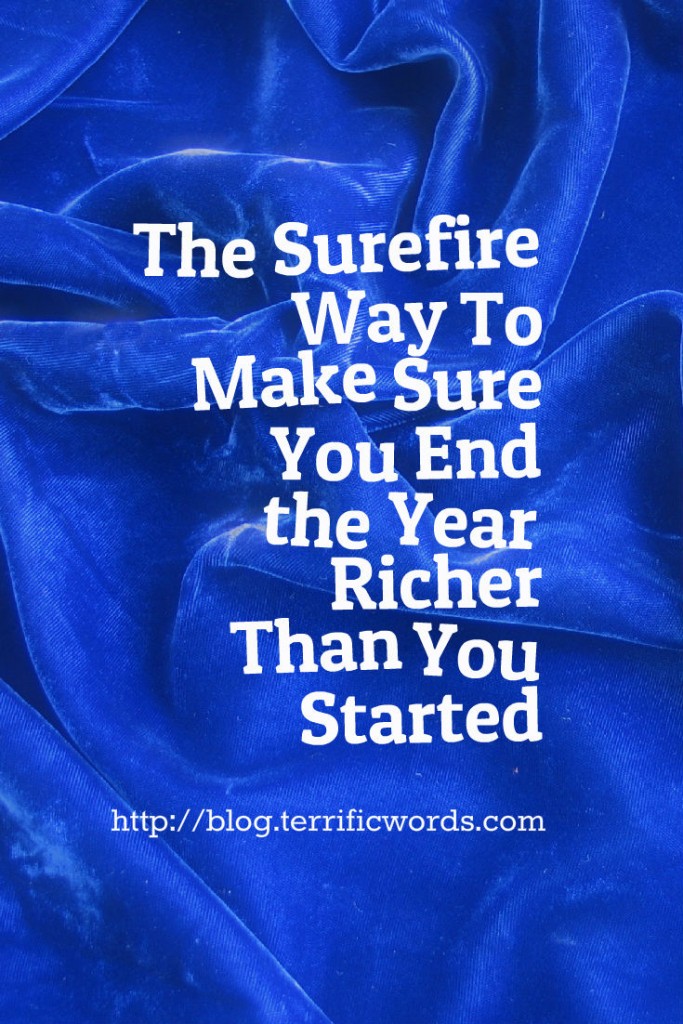 Skip the get-rich-scheme and do this instead. Easy ways to be richer by the end of the year

I know I shouldn’t look to the past but I’m proud to report that I most definitely ended 2015 richer than I started it. That’s saying a lot considering all the downfalls I’ve had. I lost someone I thought was a friend, had lots of car trouble that cost me a fortune and lots of sleep. But despite all of that, I managed to come out on top. It wasn’t easy, and I definitely made several mistakes throughout the year, but I definitely think I found a way. And it certainly had nothing to do with becoming a word class salesperson, buying tons of Powerball tickets, or pimping out my blog.

Other than vowing to be better than I was yesterday, I figured out the surefire ways that helped me end 2015 richer than I started. They worked so well that I’m convinced they’ll be the ticket to making me even richer by the end of 2016 and all the years to come. The tactics are simple enough for anyone to do but, impactful enough that it can change your life forever. Ready? Here it goes:

I know acting like you have more than you have may have been exactly what’s gotten you into a tough financial spot. However, in my case it’s been exactly what I needed to turn my whole life around. Act like you have the world in the palm of your hands and suddenly it will happen. You may not notice it, but you are already richer than you were previously. You just need to stop and recognize it. Act like you have the greatest support system in the world. Believe the home you live in is fabulous. Look your very best every day. That’s what the rich do. Act like your opportunities are endless just like the rich.

Pretend you are capable of having and doing it all. In early 2015, I felt poor because I acted poor as I only focused on all the student loan debt I accumulated. I felt like I couldn’t afford anything so of course I was poor. Once I started living richer by believing that I could afford everything I need in life, I became richer.  If you have a roof over your head, a sound mind and something to look forward to, you are already living richer than many people in this world. What more can you want? Reflect on the days you used to pray for the things you have today. Once you realize how far you’ve come, you’ll realize living richer and becoming even richer by the end of the year is not that far fetched at all. The best thing I did for myself throughout 2015 was believe I already had it all the same way a person who is rich would. Once I believed that,  there was nothing left for me to want.

Ok, yes living simply may sound like a complete contradiction to the previous tip, but you’ll soon see they go hand in hand. Once you start living on less, you suddenly realize you have more. Forget about all the unnecessary things in your life and focus on what truly matters. Doing that will allow you to enjoy what you have and spend less money and time on unnecessary things. The reason why we often don’t feel as rich as we could is because we waste too much time and money on things we can’t afford. If only we lived simply and dedicated ourselves to just to enough of what we need we wouldn’t feel like we were stretching ourself too thin and working hard to get things not in our rich. Living simply always us to save more money, feel happier and realize that everything you need is already in reach.

Pick up any financial book and they’ll most likely tell you the secret to becoming rich is mastering investing in stocks. While that’s one method to get you to the richer lifestyle you desire, it’s not the one I’m referring to. I’m simply referring to investing in the things that bring you joy. Instead of putting your thoughts and time into life sucking endeavors, redirect it to the things that bring light. Skip binge watching Scandal so you can invest some time building a stronger relationship with your husband. Or consider investing some time in heading to the library so you can read about your hobby. Instead of wasting time on the things I thought I should be doing, I invested my time in things I wanted to do that truly brought me joy. As simple as it sounds, cuddling with my husband, volunteering with kids, a pole dance classes, meditation and cooking my favorite foods truly made me feel like I was living on top of the world.

As you hopefully now see, becoming richer isn’t just about focusing on what you don’t have. Living richer about realizing what you do have and making the the most of it. Doing the above has helped me become richer in all aspects of life – financially, mentally and physically.

Are you on a quest to end the year richer? What changes in your life have you lead to a life of more riches and less poor thoughts?