I love my parents dearly. My parents gave me a lot of things throughout my years that I could never thank them for enough.  They gave me a memorable childhood.  They’ve provided me with a love of dance, a strong sense of self, the ability to love and the courage to chase my dreams. They also equipped me with a thick skin and strong morales. All things I find beneficial to a bright a future.

One thing they did not give me was a college fund. As a result, I found myself taking out loans on top of loans for a school I really couldn’t afford. And of course, I had to deal with the poor financial planning upon graduation. That meant adjusting my lifestyle tremendously to make on time payments, deal with harassing phone calls from student debt collectors, live with my parents much longer and worry about ever moving up. My parents weren’t rich by any means and still managed to provide a full life for my brother and I so I don’t fault them at all for my struggles.

Thankfully, I have since learned how to better manage money and have a great plan in place to be completely debt free in 3 years. The stress hasn’t completely gone away and I’ve still had to adjust my lifestyle but it’s great motivation for reaching my goal. I know it won’t be like this ever. It’s just what I need to do right now.

Despite the stress, struggles and sleepless nights I’ve encountered from drowning in student loan debt, I refuse to have a college fund for my unborn son. And it’s not because I have the mentality that, “I struggled so you should to.” It’s because I don’t believe in what college funds represent. 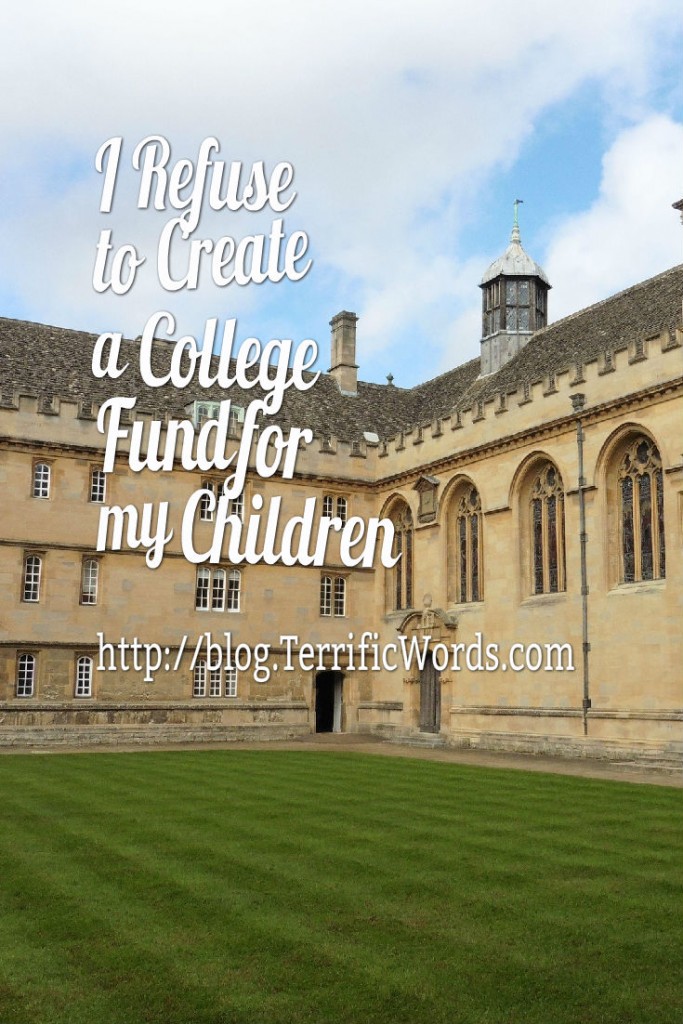 Even though I’m struggling with student loans, I won’t be creating a college fund for my kids – and maybe you shouldn’t either. They might do more harm than good.

You see, I never wanted to go to college. But back in the early 2000’s when I graduated people liked to make impressionable high school students like myself believe that either you go to college or you die. And though I still knew I never wanted a college education, I ended up falling for the hype and attended college against my better judgement. That only led to lots of debt, impending depression, and stress. And it’s all because I fell for the pressure from society and chose to ignore my heart which told me not to go.

Should my son not want to go to college, I never want him to feel pressured to do so, which is why I refuse to create a college fund for him. Though done with good intentions, I don’t believe people realize how much pressure the simple idea of a college fund could put on a young mind. Those who may not excel in formal educational settings, who prefer to start a business or never had  to desire to attend college for whatever reason may feel unnecessary pressure to go just because their parents had that college fund. Think about it. A child may be unlikely to tell their parents the truth about their feelings towards college if the parents had a college fund because they wouldn’t want the parents to feel as though all their saving was pointless.

I would hate for my child to have to grapple with that kind of guilt. I have no idea what kind of personality my child will have, what his skills will be, or how he handles adversity. Starting a college fund for him would be pointless. So my husband and I have decided to forego the whole college fund idea completely.

And no, that doesn’t mean that if he does decide to go to college he’ll be screwed over financially. What it does mean is that we’ve decided to have an open mind about his potential decisions or lack thereof in regards to college by foregoing a college fund. Instead, my lucky bundle of joy will have what I like to call an adventure fund.

The way I see it, my unborn baby has the world available to him. As he is busy cooking in my uterus right now, his adventure awaits. I don’t want to make him laser focused on that adventure leading only to college by creating a college fund. I prefer he have an open mind about what awaits him. So instead, the adventure fund will allow him to do what his heart desires at the completion of high school (with my approval). He may decide to travel the world while volunteering while building relevant skills that can translate into his dream job, he may choose to get a professional certification, he may decide to start a business or he just might choose to go to college.

Whatever he may choose, it will certainly be an adventure and  that adventure fund will be waiting for him to help him financially along the way.

Sure to many people, calling it an adventure fund over a college fund is just semantics. However, I’ve learned that it’s so much more than that. Just that one word change means my son knowing that his parents will love and support him no matter what. He will know his success in this world is not necessarily tied to the most expensive piece paper to exist, but dependent on his drive, passion and ability to make things happen. He’ll have the freedom to make sound, logical and even passionate decisions about his future while maintaining an open mind and not be pressured to go in any direction. The adventure fund that awaits him will encourage my child to live on his terms whether or not it be with a college education in his pocket.

Did you have a college fund? Do you plan on starting one for your kids?