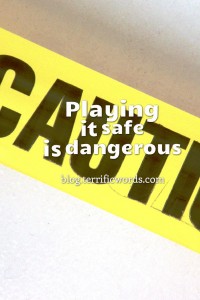 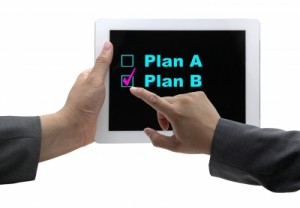 I live in a one bedroom apartment with my husband, drive a ’97 Ford Escort, and deal with private student loan debt nearly in the triple digits on a daily basis. Most people in my position would probably do everything in their power to get a normal 9-5 job with a steady paycheck so they can stay above water. But I’m not like most people. I’m crazy. I chose to go against the grain and chase a career synonymous with starving artists and being stuck in the poor house. But I equate the profession with empowerment, and true financial freedom. Making six-figures as a freelance writer is my goal and nothing will stop me. And despite the struggle and hardship from time to time, I never once thought of trying something else in the event writing didn’t work out because it WILL work out.That means having thoughts such as, “I’m going to try out accounting just in case this writing thing doesn’t work out,” or “I think it’s time I start looking into some other opportunities in case I never come up financially with my current plans,” never crossed my mind.  If it had, I would be doomed forever. Why? Because concocting Plan B’s put  you on a straight path to Loser-ville. (Can you tell I’m not talking about the emergency contraceptive known as Plan B?)

Think about it. The moment you start thinking about “Plan B” opportunities is the exact moment you remove yourself from your original plan. From that point,  you are only half-heartedly dedicated to your goal and setting yourself up for failure. Most importantly, you will be settling for second best. In case you haven’t noticed, setting up for a “Plan B” gets in the way of “Plan A.”

I’m willing to bet that if you were the “girlfriend” in this situation you wouldn’t be commending your significant other for being responsible. Nor would you be applauding this person for being “realistic” regarding the current situation. The only thing you would want to do is strangle the person for thinking you were not worth the effort and reducing you to  “the option”. You essentially became the back up plan, an insignificant option, and a way for him to settle. Most importantly this relationship would no longer have any hope to survive, because the boyfriend had already checked out once he started finding other girls for his Plan B. And of course, the boyfriend would definitely be branded a loser for ignoring his current relationship, and most likely ending up alone since most girls would be unwilling to be any man’s option.

The above scenario is exactly what happens when you begin inserting “plan b’s” into various areas of your life including job opportunities, friendships, business deals, etc. And not adhering to the notion of needing a backup plan is exactly why there are many people who make a great living writing, millions of people who captivate the hearts of many as singers, and even more people living their dreams of being business owners or entrepreneurs. The people who have amazing careers and reached their goals understand that dreams have no room for backup plans.

On the other hand, show me a man who’s chosen “plan b” and I’ll show a man that’s become an unhappy loser. That man will most likely be the person who has settled and spends the majority of his time wondering “what if” as he struggles to find something to fulfill him the way his “plan A” once did.

Take it from me -you don’t want to be a loser and there’s no need for you to become one. Contrary to the rules of society, I challenge you to put all your eggs in one basket; especially when that basket is filled with conviction, dedication, hard work,  talent that is willing to be perfected, and faith that it will lead to a better life.

What are your thoughts on having a plan b? Do you think it is a wise choice or a setup for failure?