When I want something, I go after it and believe it with every breathe within me. It’s not always easy though. I have to deal with my own fear, different circumstances, and doubt from other people just like everybody else. I even experienced it within my own friends and family. So when I set out to win a honeymoon to follow my upcoming nuptials, everyone thought I was a bit crazy. My fiance delivered the sarcasm, my brother brought the laughs, and my dad delivered his own special dose of realism.

Well, I didn’t care. For some reason, I knew what I wanted would take shape sooner or later. Of course, I knew the odds were against me but it didn’t matter. The only thing that mattered was what was in my mind. Sure, it may have been a superficial wish and one that held no weight in the grand scheme of things but it was one that I was determined to receive none-the-less.

The day it happened was just like any normal day. My fiance was headed to a basketball game and I was neatening up the home. After what seemed to be the hundredth attempt, I asked him to attend a bridal show with me in Princeton. And of course, he scoffed at me, said no, and asked why I continuously attended these events. My answer was simple. “I want to meet people and I’m winning us a honeymoon.” As usual, Brian chuckled and offered his usual sarcasm as he headed out. My last words to him before he left were, “Trust me. I’m not coming home until I win us a honeymoon.”

After mingling at the bridal show for a few hours, it was time to gather in the meeting room to see the fashion show and announce the winning raffle tickets. Everyone held their breathe as they waited to hear if the winning raffle number matched the one on their ticket. The first number was called and it wasn’t mine. My heart sank a little once I realized it wasn’t my number. Everyone looked around the room and but the winner was no where to be found. That meant there was another chance for me. The announcer called a new set of numbers. Once again, it wasn’t mine and my heart plummeted. And again, my heart sank. I kept having thoughts of going back home, having my fiance pick on me after making such a big deal about winning and then coming home empty handed. So I did what any normal person would do in this situation. I begged, pleaded and prayed to myself. As I zoned out, I imagined myself winning this honeymoon and convinced myself that we deserved it after having such a rough year thus far. As I came to, I heard the announcer say, “Last chance for raffle ticket 3307794 .” I promptly checked my ticket and realized that within my hands were the winning numbers. 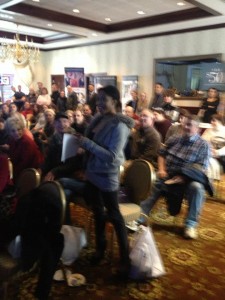 The moment I won a honeymoon to Mexico.

It turns out that all those times people said, you just have to believe and it will happen and “mind over matter” were right. I know because I experienced it. I pictured myself a winner. Lo and behold I became one. Sure, it was a long shot but it just might be proof that when you change your thoughts, you change your world. I told everyone that I wasn’t coming home without a honeymoon and I was right. Sometimes all it takes, is that vision and genuine, firm belief that it WILL happen.

Some may argue that I won because of luck. Others may say, my prize was a sign of prayers answered by God. Regardless of what may have made my wish come true, there is no denying that my what I envisioned in my mind took form. I guess it’s something to mull over while I’m on my six day, seven night honeymoon at an all-inclusive resort in Mexico!

Have you ever had something you envisioned  later take shape in your life? What was it and how did it happen? Do you believe the power of mind over matter?

TERRIfic Quip: What a wonderful thought it is that some of the best days of our lives haven’t happened yet.