I think we all want to do something or say something to make a difference but we often don’t know how.

I had an epiphany the other day. I’ve been doing myself and those around me a disservice. I haven’t been speaking up when I should. Other than writing letters and posts about topics I feel strongly about and truly matter, I haven’t spoken about them to any one – sometimes not even my husband. As a matter of fact, I haven’t said much of anything. I haven’t really shared motivational quotes with friends, haven’t uttered anything even remotely inspirational and barely mumbled my usual perky tidbits. For some reason, I’ve changed.

I’ve been completely silenced. And I have no one to blame but myself.

You know the phrase, “If you don’t have anything nice to say, don’t say anything at all.”? Of course you have – we’ve all had it beaten into our heads from the time we’ve entered kindergarten. I’d like to think I’ve lived according to life lesson about kindness. The only problem is I’ve taken it a step further.

I subconsciously decided to live according to the foolish and non-sense based, made-up adage, “If you don’t have anything wise, uplifting, or completely life changing to say, keep your big mouth shut.” 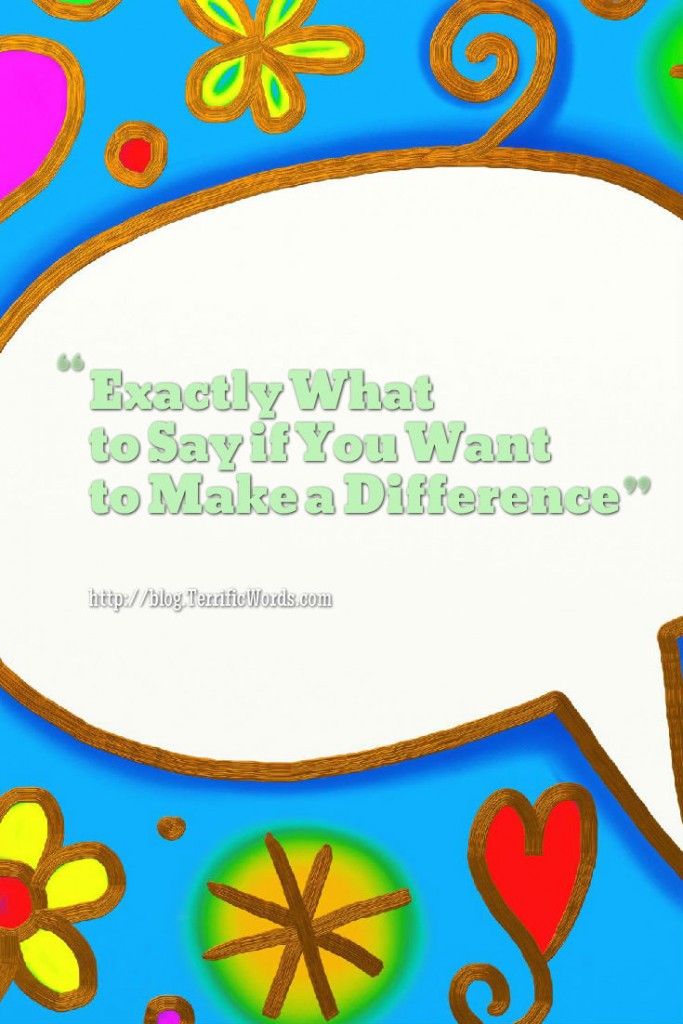 And though it was out of character, that’s exactly what I did. But I wasn’t always that way. I was once the person who always had something motivating, thought provoking, or smile-worthy to say no matter the moment. I was the girl everyone turned to when they needed just the right words of wisdom to give them the kick in the pants they needed to head in the right direction or just continue looking up.

But somewhere along the way, my unique and creative adages dried up. My happy go-lucky and inspirational word choices were no longer at the tip of my tongue. I couldn’t come up with anything memorable to say so I didn’t say anything at all.

I foolishly decided that I dare not risk saying something that fell even remotely short of smile-worthy. After all, I had a reputation of the positive and inspiring one to preserve. At the time, it seemed the smartest thing I could do during those weeks of having nothing life-changing to say was to be quiet to avoid giving anyone a reason to call me a fraud. (It’s funny how trying to maintain an image can affect us so much.)

So each morning I refrained from noting something positive or uplifting and simply said, “good morning” to those I came across. Though it was evident to some that I changed by staying quiet, I thought it was working out well.

And then one day I did the unthinkable and dared said more than, “good morning”. I made the mistake of making small talk with a clearly frustrated woman by telling her that her name was beautiful and actually showing that I knew how to spell it. Her name is Genevieve. Of course, I felt like an idiot when she didn’t seem too thrilled by my odd decision to spell her name (even though it was spelt correctly.) In fact, she repeatedly told me how much she hated her name and that it wasn’t a big deal until she finally scurried off. My attempt at saying more was clearly a fail. Or so, I thought.

At that moment I was convinced that it really was wise to just mums the word if I had nothing of essence to utter.

After my bust, I decided the best thing for me to do was to abstain from trying to find uplifting words and possibly making a fool of myself. So I went back to just saying, “good morning” Then several days later, I ran into the woman who’s name I tried to compliment again despite my effort of trying to stay clear of her after looking foolish previously. Avoiding her didn’t work. But the word she said surprised me after I said my usually good morning greeting.

“You really made my day,” she said in response.

“What?” I was confused. How could I have made her day when all I said was good morning and a compliment about her name a few days ago that fell flat?

“You really made my day when I saw you last. I was feeling miserable and you gave me something to smile about when you complimented my name.”

I was shocked. She went on to say, “You have no idea how much I’ve hated my name growing up and into adulthood. Everyone would also tell me how complicated it was and no one could ever spell it. It bothers me so much that I hate telling people my name. So what you said the other day really made me feel better.”

Those may not have been her exact words, but you get the drift. While I was beating myself up over saying the wrong thing and looking stupid, this woman was feeling good about herself.

And all I did was compliment her name. It was as simple as that.

I couldn’t help but wonder how many other people I could have helped had I spoken up and said even the smallest things. For weeks I kept my mouth shut in fear of having people look at me strangely and possibly saying the wrong things to others that may upset them. Turns out I was possibly robbing myself and them of what could have been a precious moment.

Sometimes we get so blinded by the idea of living up to the hype, we completely forget that it takes the smallest acts to make a difference. Think about all the life lessons and most memorable moments that left an imprint in your heart. Have they all been the most thought provoking? Probably not. I know one of my most memorable moments with my family is that time my brother said, “Mom said she’s 16.” It didn’t make any sense and was probably the dumbest thing, but for some reason the silly moment stuck with me and makes me smile to this day.

One of the worst things we could do to ourselves and those around us is be silent to maintain an image or simply out of fear. Forget about looking silly, not being the wisest and or not having anything earth shattering to say. If you truly want to make a difference and say something to change someone’s life all you need to do is be honest. It’s the honest words that go the farthest no matter how ridiculous they may seem. You never know who you could be touching with your mindless babble, silliest slip ups or most honest reviews.

Never underestimate the impact the sound of your voice, the choice of words and honest phrases or silliest slip ups could have on someone.

So continue on with your timid “good mornings,” nervous “Hi’s”, corny one-liners, mindless facts, and meaningless banter. Sometimes at the end of all that garble you may finally get to something that truly makes a difference even if it’s just one word.

By staying quiet, even if we have nothing world changing to say, is truly robbing the world of something beautiful.

TERRIfic Quip: It’s the honest things we say that make that biggest difference of all.