Repeat after me: What I focus on will become my future

They all said get a side hustle. It will be easy, they said. Yet, no one thought to mention how easy it is for that side hustle to completely take over you life. But thats exactly what happened to me. Here’s how… 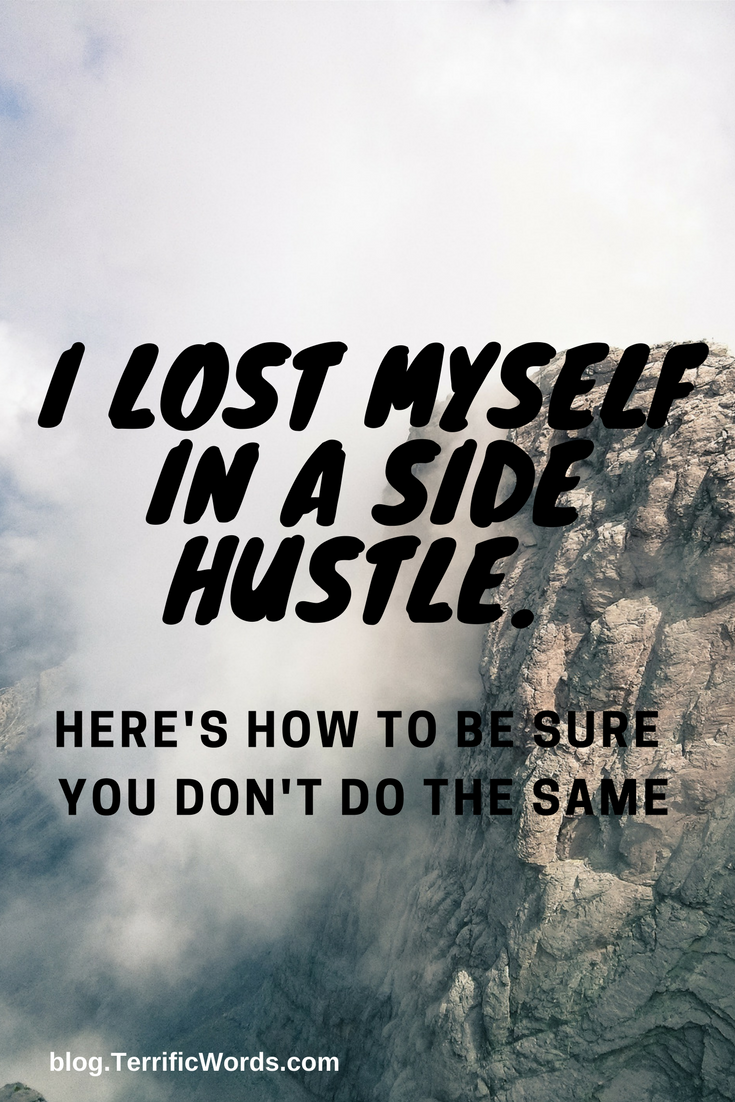 A side hustle can be great for paying off debt, learning new skills and meeting new people. But it’s not always a good thing if you’re not careful.

For as long as I could remember, I’ve been one of the lucky ones amongst my peers in which I’ve always known what I wanted to do with my life. It was simple. I’d write for national and local publications, make some money from my blog and my name will be recognized and synonymous with insightful perspectives in my writing. And I got some of that right. What I didn’t account for was the amount of student loan debt I’d be swimming in.

So I did what all the pros said I should do. I got a side hustle and then quickly got another one. Neither one of them stayed simply side hustles for long. One of them became an extension of my career and the other took away from my career, family and the person I was meant to be. Of course, I didn’t notice it until I was too far gone because I was blinded by the money.

It may sound crazy, but there is definitely such thing as easy money. And it can get addicting. However, it’s not always a good a thing. When you run a blog that talks about money so much, it’s easy to think that it’s all about the money. But it’s not. The problem all started because I began to master my side hustle, which in hindsight, was worse than I thought.

Could you blame me? It had all the perks of a side hustle without the hustle. Flexible hours, fun, and money on a schedule. What it didn’t have was something that offered me purpose and fulfillment like my writing does. Yet, it didn’t take long for this easy gig to go from weekend work to Monday, Wednesday, Friday work to literally every day work.

As I mentioned before. I got blinded by the money and the fact that it was a side hustle without the hustle. As much as I loved writing for magazines, I was getting tired of the hustle. Constantly having to push myself, promote and kiss up can get tiring y’all. So when the opportunity came to make more money without the work, I jumped at it.

I jumped in so deep that I was barely working on my blog, community service, pole dancing or pitching publications. What’s worse is the side hustle was beginning to make me frustrated which I was taking out on my family. I didn’t even notice it or how it happened. I knew that I was making more money and I was happy about that. But I didn’t notice how unhappy I was becoming and how unfulfilled I was in the process.

You ever look around, examine your world and wonder how you get there? Or you ever find yourself in a place you can no longer recognize. And once you realize you are somewhere you aren’t supposed to be, you have no idea where to go? Well, that’s exactly what happened to me. One day I woke up, I had no idea who I was or where I was and I wasn’t even sure how to get out of it. And I was disappointed in myself for letting myself get to that point.

Despite how much time I was dedicating to this side hustle, I didn’t realize that I lost sight of my intentions and myself until I was going through my to do list one day. I had eight items listed and six of them were in relation to my side hustle. Only two had anything to do with what I considered my career and purpose.

The problem was really actually simple. I was dedicating so much time to this side hustle that I lost myself in it. However, I’d be lying if I said I didn’t know what I was doing. I knew exactly what I was doing when they said they’d offered me more responsibilities and dangled some dollar bills in front of my face. I knew I was chasing the money. But what I didn’t know was that chasing the money was taking me a way from my heart and sole.

That’s exactly what happens when you lose focus. Instead of focusing on the love of writing and making a difference, I focused on the money. And money is the only thing I got out of that situation. Had I not gotten so caught up in the hustle, remembered how much I loved what I did and focused on the difference I could make in my family’slife, I never would have ended up head deep into a side hustle I really didn’t care so much for.   I focused on excelling on my side hustle because the money came with it and a life full of side hustle crap is what resulted. It really should have come as no surprise that dancing or writing didn’t take off like I thought it had. I wasn’t focusing on it and I didn’t set terms to the side hustle before I started.

Don’t end up like me. I admit that it was a lot easier for me to get lost in my side hustle because I already have a flexible yet risky career. It’s not surprising that I got a tad fed up with the hustle and went to something that seemed a bit easier and money SEEMED to come effortlessly. However, this can happen to someone with a “stable” full-time job also. Maybe you’re  a trained interior designer and you picked up a job cleaning homes instead because the money came easier. Or perhaps you started out as a basketball coach and found yourself doing the accounting for a college part time instead because the hustle to become a big time coach was becoming too daunting. That shift from what you want to do to what you think you need to do or simply fell into can happen to the best of us.

The trick is to remember why you started. Don’t focus on how tiring your chosen career is and don’t focus on the money. Instead, focus on the light at the end of the tunnel. There’s a reason why some people succeed at paying of all their debt and others don’t and there’s a reason why some people become professional singers while others end up in completely different careers. And there’s a reason why some people pick up side hustles and then suddenly turn their side hustle into their main gig.  Simply put, what you focus on becomes your future. So if you suddenly find yourself in a position you never expected, look to your focus. You’ll most likely find the answer there. And if you don’t like the answer, it’s never too late to shift your focus. Lastly, if you side hustle is not your main goal, remember to make a schedule and to do it on your terms, not someone else’s.

Have you ever gotten too caught up in a side hustle or job?

TERRIfic Quip – Don’t let the process punk you out of the promise.