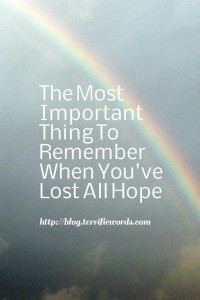 If you are facing a challenge today, scared to go one, or just want to give up – this post was written for you.

For what ever reason, you can’t bare to make it through.

You’re convinced the next 24 hours just might be enough to do you in.

You’ve lost all hope. I’ve been there. We’ve all be there.

But before you throw in the towel, please promise you’ll try to remember this:

There was once a time when logic didn’t matter to you. You didn’t care what the numbers said or what the naysayers thought.

Everything around you pointed to being wrong, but you knew you were right.

So you believed with all your heart in Santa Claus, the Tooth Fairy, or the Easter Bunny. It didn’t matter what the skeptics said. The fervor in that belief wasn’t dying if you had anything to do with it. And though it didn’t make any sense, that belief gave you life. And you probably let that belief live one for at least 7 to 10 years.

So if you could belief so passionately and innocently for several years, you are more than capable of believing that strongly for a few hours… for a few days.   You have the ability to love yourself for a mere day to conquer whatever challenge you are facing today.

It doesn’t need to make sense. The numbers may not add up. And logic may not be involved in the least bit. But if you just believe in yourself with half the heart you dedicated to the belief in Santa, the tooth fairy or Easter Bunny, you have what you need to make it through. Borrow just even an ounce of the passion you used to believe as child and nothing will ever be the same. 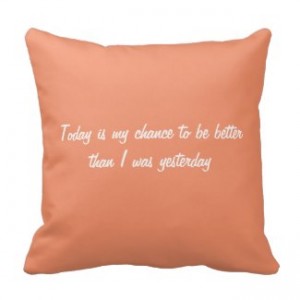 I trust you. Now all you need to do is trust yourself.

TERRIfic Quip: This world is nothing if you don’t believe. If you can’t think of anything, take the chance and believe in yourself