This week’s fears were all over the place. However, I found myself dealing with a lot of water and air related fairs (i.e. snorkeling, 9/11, airports.)

September 5: Catamaran. So I have to admit I wasn’t really scared of going on the catamaran. That is until I realized how far 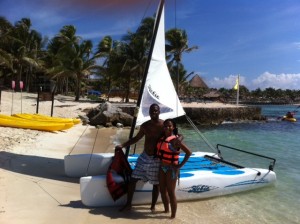 into the ocean it goes. We were so far away from shore that the depth of the ocean was 150 feet. However, the really scary part was when we had the option of jumping of the catamaran into the ocean to swim around a bit. Well, I didn’t swim around. But I did get off the boat and cling to it for a while. That is an extremely big accomplishment considering how deep the water is and my major fear of the ocean.

September 6: Snorkel. Remember in my last post, when I tried to conquer my fear of the natural pool and the snorkel mask? Well, today I combined the two fears and actually went snorkeling in the natural pool. It definitely took a while for me to do it. But the help of my husband and kind strangers at the resort I was able to get in. It’s amazing how far the support from people you don’t even know can take you. While I didn’t drown in the natural pool and saw some cool fish, I don’t see myself snorkeling ever again. I think I’m better off with a regular mask and looking on my own.

September 7: Slept in hotel airport.  On the way home from Mexico, we had a 10 hour layover in Dallas, Texas. Overnight. It didn’t make sense to spend a lot on a hotel so we decided the best thing to do was wander around the airport. Well, it turns out everything in the airport shuts down at 9pm so the only thing we could do was sleep. But of course, that was a feat considering I have a major fear of sleeping in the airport due to security reasons. After all, it’s hard to feel safe when you are knocked out in public vulnerable to what predators may be lurking the airport at night. Once I took a walk around the airport to scope things out and received a free cot from the friendly workers I was able to get a little comfortable so I could sleep. I even made sure I got to know some of the employees so they could look out for me. Even though I fell asleep, I did wakeup periodically to make sure everything was in order. 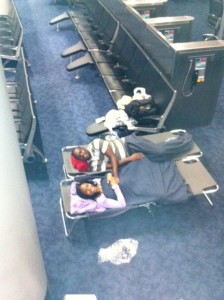 Sleeping on the cots at Dallas International Airport

September 8: Followed up with pitch. Before I left for my trip, I pitched a personal essay to an editor at Ladies Home Journal. While she liked my idea, she suggested I rework the story on spec to make sure it is more on target with the magazine. Well, I submitted the assignment and was expecting feedback upon my return. Unfortunately, I came back to nothing. So at the fear of being a nuisance, I sent a follow up email.  I’m crossing my fingers for a positive response.

September 9: Emailed a former supervisor. I was fortunate enough to nail an assignment from MediaBistro. The editor suggested I speak to experts, namely editors turned freelancers. The only person who came to mind was an intern supervisor I had a few years back. While I knew she was the perfect person to contact, I was afraid she wouldn’t be receptive to my inquiry since we hadn’t spoken in so long. Well, she proved me wrong. Not only was she willing to help me out, but she sent me a very long email with tips for my article.

September 10: Commented on a “friend’s” wall. Despite the purpose of being “friends” on Facebook, I was still afraid of commenting on this one particular person’s wall to ask about where she lived. For some reason, I thought she would think it was weird considering we hadn’t spoken in about a year. Instead of ignoring my comment, she responded really quickly. However, that doesn’t prove that she won’t think I’m weird because of my random comment.

September 11: Watched the 9/11 Memorial Specials. I was 13 years old when the terrorist attacks happened. While I was fortunate enough to have not lost any loved ones, I’ve never been able to muster enough courage to watch any of the specials on TV or attend a memorial service. I guess I was afraid that watching one would confirm my worst fear – that the world isn’t as pleasant as I would like. For some reason, I convinced myself to watch the memorial on TV through tears. As depressing as the memorial was, I was able to take something positive away from it. There is always hope. Thus another fear has been averted. No matter how hard life may get, it’s important to live it with hope.