Because being a good domestic wife and business woman like my mother is a goal of mine, I decided to focus on fears regarding those. There’s a lot of pressure when it comes to the ability to do it all. Yet, so many women seem to do it so well.

October 17: Appealed an article. I started writing for Demand Media so I can improve my ability to write quickly and on deadline. Unfortunately, I had my first article on the site rejected. I was dumbfounded. Rather than just letting it ago, I decided to fight for it. Of course, I was afraid my appeal would be rejected and ultimately look like a fool. But I did it anyway. Cross your fingers for me.

October 18: Did a cooking challenge. Because of Pinterest, I’ve become obsessed with all things pictures and recipes, despite my lack of skill. I foolishly decided to cook all meals for the month. I was afraid to do it because I was worried what I made wouldn’t taste good and we’d be stuck eating disgusting food for a month.

October 19: Spontaneously went to Ikea. In addition to pole dance class, I had food to prepare ,a home to clean, work to complete, people to see and gifts to buy. Instead of doing any of that, I fearfully decided to skip out on all of that to go to Ikea with a friend. Of course, there were worries about ruining my schedule of events and letting people down. Oddly, enough there were no hiccups that resulted from my trip to Ikea. And it was a lot of fun. Fear Averted! 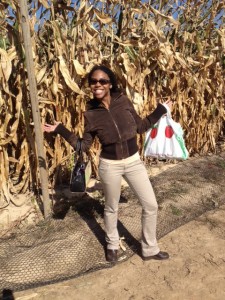 I successfully completed the corn maze!

October 20: Did a Corn Maze. Sounds crazy but I am terrified of corn stalks. They are so tall that you have no idea what could be going on in them. I don’t even like driving by cornstalks. A bear might jump out at me randomly. Plus, I’m afraid if I ever did a maze I would get lost and feel like an idiot for having to call the cops to find me. However, I decided to get in the holiday spirit with some friends. We went to the farm in Princeton for some apple picking and fall time fun. Afterwards, the corn maze was mentioned. I reluctantly went along. As predicted I was scared in there. The rustling of the stalks and the uncertainty of where I was going really got to me. But I made it out without any bear attacks and without have to call for help. Fear Averted!

October 21: Invited friends over. I live in a one bedroom apartment with my husband with minimal space for anything. Our very new friends live in a newly renovated two bedroom loft. They always graciously invited us over to their home for our date nights. However, when you have a couple who seems to be doing so much better off than you financially, I think it’s natural be a little apprehensive about inviting them over to your place. My husband and I were afraid of being judged for not having as much as they had. We decided to push aside our fear and invite them over anyway. We were very happy when they complimented us on our decor. Fear Averted!

October 22: Agreed to travel with Princeton University. My husband , the pro videographer and producer, travels with the girls field hockey team all over the country to film their games. Since the team coach is very welcoming she always invited me to go with them to a game, but I’ve always declined. (You’re probably thinking, “What woman would decline the chance to chaperone her husband while he travels with a bunch women?!”) I’m not very charismatic and extremely shy so I’ve always been afraid of my ability to fit in with everyone. After some more convincing, I finally agreed to travel with the husband one day. I’ll report back when the day comes.

October 23:  Agreed to plan and host a surprise party. I am not good at planning parties. I’m always afraid of screwing up and putting myself out there. There’s nothing worse than throwing a party where no one attends. That is just embarrassing. However, I decided to put my fears aside in order to plan a surprise party for some loved ones. Hopefully, things turn out well.

Scariest fear of the week? Agreeing to do a corn maze. What has your experience in a corn maze been?