While I realize this week’s fears may not be that exciting to most, they still look a lot of courage from me. Challenges at work can mean major triumph or major failure. Obviously, it was the “major failure” part I was afraid of…

September 12: Called the editor to follow up on personal essay. After the success of my last personal essay, I decided to send another one. While the editor liked the essay, she said it read like I was holding back and asked the I work on it again. Unfortunately, after writing and sending it to her, I never hear from her again. So against my better judgement and fear, I called her with my throat in my chest. I didn’t want to be a nuisance. I left her a voicemail and my head hasn’t exploded yet. We’ll see what happens if she calls back.

September 13: Showed my confident side in a pitch. I sent a pitch to an editor that I was afraid came off a bit too confident. The subject line read, “I got it this time,” with an accompanying line in the body that said, “You won’t be able to say no to this.” I was so afraid that my over confidence in the pitch would be a turn off to the editor and she’d never want to work with me. Well, the editor did say “no” to my pitch. However, she also said that she admired my gusto and encouraged me to keep pitching her. I was happy to say my fears were averted and my over confidence resulted in a compliment.

September 14: Sent a pay or die letter to a client.  A client of mine owed me money since the end of August. In mid-September I still hadn’t received the check despite it being in the mail. So I did what any businessperson out on money would do. I sent him a “pay or die” letter. I hated having to resort to it, but I was afraid I would come off as too mean. Much to my surprise, the client was so apologetic and I received the check in two days.

September 15: Tweeted an editor. Well, I sent a tweet to an editor and was afraid I would just look extremely corny and pushy. Turns out the editor didn’t think I was pushy at all as she responded and seemed excited to help me out.

September 16: Decided to start something new. Without going into too many details right now, I’ve made the decision to take the first step towards something new. And we all know how scary that can be… Stay tuned for the update in the weeks to follow.

September 17: Gave out play-doh. Everybody gives out businesses cards when they go to anything business -related. But I wanted 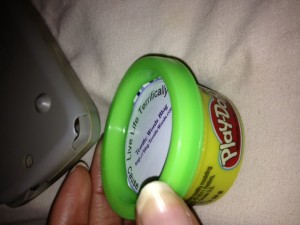 The customized Play-Doh I passed out at a presentation.

to stand out, so I decided to hand out play-doh with my business name on it to go with the theme of one of my most popular blog posts about Play-doh.  However, I was afraid my quest to “be different” was a bit too different and wouldn’t be well-received. I kept thinking giving out play-doh was a little too far out of the box. Yet, I got several emails from people who thought the play-doh was a great idea and planned on using it to revisit childhood.

September 18: Asked for someone’s email address. While my husband and I were in Mexico, we became good friends with another couple who provided me with their email address. Unfortunately, I lost the email address and therefore can’t contact them. So instead, I did something against my better judgement that may come off as a bit stalker-ish. I contacted an employee of the hotel and explained the situation with the hopes they would provide me with the email address. To my surprise they didn’t shame me for even asking and make fun of me. Instead, they offered to forward my email to the couple so they could reply to me when they could.

Have you conquered any fears at work lately? What happened?