Unfortunately, the lack of strong internet connection during my vacation at Dreams Puerto Aventuras in Mexico last week prevented me from posting my usually fearless post on Thursday. This week didn’t have any particular focus. However, fire and liquid seem to appear often.

August 29: Applied for model positions. Today I decided to take my modeling a step further. Instead of settling on promotional model gigs, I decided to apply for some real paying photo shoots. Only time will tell how this plays out.

August 30: Drove on a dark road. I am scared to death of dark roads. How can anyone expect to see anything when there are no street lights?! It doesn’t exactly help that I live in an area with a bunch of deer crossing signs. Well, I decided to take a drive on the wild side in the dark when picking up my husband from the train station. I drove faster than I should have and gripped the steering wheel so hard my hands hurt, but I made it out of the darkness. While I live to tell about it, I don’t think I’ll ever do it again. My husband will have to find his own way back home from the train station after hours from now on.

August 31:  Burned my hair. Remember last week when I got a new hairstyle also known as yarn braids? Well, during the styling process my friend ran out of light fluid which is used to stop the ends of braids from unraveling. However, I didn’t worry too much because my friend said it wasn’t necessary. Plus, the thought of burning my hair was scary. I’d imagine it would be scary for most people. But for the sake of keeping my hair beautiful for the duration of the trip, I decide to give the whole hair burning thing a try. Yes, it did catch fire a few times but it wasn’t anything a quick blow couldn’t fix.

September 1: Drank alcohol in a moving car. There’s not much to explain here. Since the laws in NJ prevent anyone from drinking alcohol in a moving vehicle, I was scared about doing so in Mexico. Turns out I had nothing to worry about and learned their wine coolers taste great. And no, I was not driving!

September 2: Went kayaking. As you already know, I am scared to death of water. That fear certainly didn’t go away in Mexico. 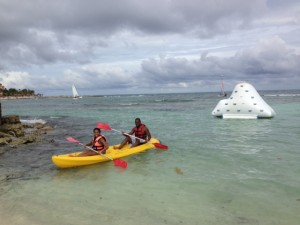 In fact, it tripled immensely as I looked at the choppy ocean waves. They definitely didn’t provide for a smooth ride. So it shouldn’t come as a surprise that I screamed the entire time I was on the kayak. It didn’t help that my back and shoulders hurt immensely as I used the paddles. But despite the pain in my back and and choppy waters, my fear of the boat tipping over did not happen. However, my fear did not allow me to enjoy as much as I would have liked. For that reason, I would like to try the kayak again during this Mexican Adventure.

September 3: Used a snorkel mask. Before leaving for Mexico, I made a pledge that I would snorkel during my trip despite my great fear of water. As a way to force myself to commit to snorkeling, I invested in snorkeling equipment. After all, I would have no choice but to snorkel if I didn’t want to waste money. However, it wasn’t that easy. Turns out my fear of the snorkeling mask was just as big as my fear of the water. (It brought back memories of oxygen masks I had to wear during surgery as a kid.) As a result, it was a big challenge for me to even get the snorkeling mask on my face. Every time I put it on, I began to panic and immediately pulled it off my face. However, after several attempts I was finally able to keep the snorkel mask on and breathe comfortably for at least one minute. Hopefully, this is only the beginning to my snorkel adventures.

September 4: Went in the natural pool. Dreams Puerto Aventuras Resort is extremely beautiful. It exudes natural beauty. It’s so natural that enclosed natural pools exist only for the resort. With in the natural pool are schools of fish of various colors. It is absolutely perfect, except for the fact the middle of this natural pool is over 6 feet deep.That’s a problem for someone who is is barely 5 feet tall and scared to death of water. Despite wanting to get in the pool so bad to explore it’s natural beauty, I couldn’t bring myself to get in completely. So instead, I braced myself to barely step in and get my thighs wet. It doesn’t sound like much, but it’s a big accomplishment for me. 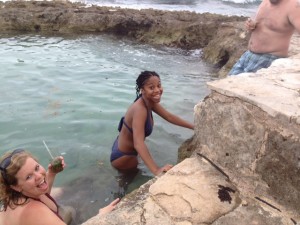 It was scary, but I found away to step into the natural pool at the Dreams Resort.