While some of these fears deal with physical issues, I tried to focus on issues revolving communication and relationships.

August 22: Tested my flexibility. I am a serious dancer. At least, I used to be before I graduated college and got a job. That means I haven’t been stretching like I used to – partly because I did not have time. The other reason was because I was afraid to see how out of shape I’d become. I decided to face my fear and attempt a split. It hurt like hell. Worst fear confirmed!!!! It’s time I got back to stretching religiously again.

August 23: Committed to running a 5k on September 21. No explanation needed for this one. Despite training for a 5k I still scared to commit to one. I’m afraid that I won’t be in shape in time for the race. I’ll just have to get over it now, because I’m officially running a 5k to raise money for the March of Dimes. Wish me luck!

August 24: Challenged the popular opinion. I think everyone can relate to the fear associated with being the lone voice in a crowded room. I was faced with that fear when playing a game with a group of people I didn’t know. The rules they followed were completely wrong. I know it’s sounds silly, but it’s never easy when you are going against the popular opinion. We went through two rounds of the game playing the wrong way as I quivered in my seat wondering if I should bring it up. During the third round, I found it in me to mention the rules we were following were wrong. Luckily everyone was receptive my challenging the rules. A quick  glance at the rule book proved that I was right. Not long after, everyone thanked me for calling them out on the mistake.

August 25: Got a new hairstyle. If you know me, you’ve noticed that I’ve pretty much had the same hairstyle since my high school days. For the most part, it’s either kept out at shoulder length or swept back into a bun. Of course, that is a little peculiar to those who think all African Americans have weaves or braids and change them every month. B elieve it or not, I’ve always been so scared to get braids or a weave. I just always found it important to just have my own hair. But when my friend offered to give me yarn braids, I thought it was the perfect time to conquer that fear. Even though I was scared to let foreign hands touch my head, I found a way to calm my nerves so I could put my trust in her. And I’m so glad I did. After 10+ years of the same hairstyle, it’s feels good to shake things up a bit. Here’s the final product: 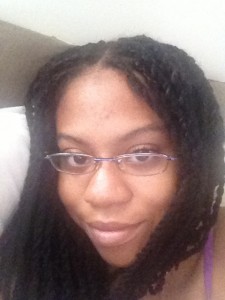 August 26: Inquired about lease rates. Well, it’s that time of year when lots of people are moving. That means it’s time for hubby and I to think about renewing the lease for our current apartment. It’s no surprise that renewing our lease means a rent increase. While my significant other was content with just signing it with it’s current terms, I considered inquiring about the reason for increasing rent. While I know it’s an innocent enough question that I deserved an answer to, I couldn’t help but fear being a bother and confrontational. It took me a week to muster up the courage to send that email demanded answers. While I didn’t get the answer I wanted, I’m glad I made the effort and certainly plan on following up with more questions.

August 27: Talked to someone about my friend issues. It’s no secret to most that I”m a very private person. That’s why I kept it to myself when it came to the issues I had with a friend who had drifted away. I guess part of me was afraid of opening up to someone only to be harshly judged and the other part of me was afraid that opening up would only make the situation real. Well, I put my fear aside and discussed my issues with someone close. Despite the fear of being judged, I was pleasantly surprised to find that a lot of people have experienced being dumped by a friend with no explanation at all. I’m glad I talked to someone about it.

August 28: Closed the door on a friendship. Yesterday’s conversation with someone close gave me the courage I needed to emotionally end that friendship. No, I didn’t call her to officially banish her from my life, but I did the scary act of removing her from my mind. After all, she made it clear that I was far removed from her mind. It’s a scary thing to picture my life without her, but it’s something I just have to do.

Scariest thing I did this week? Dealing with being dumped by friend. How have you handled issues with friends?