Last week, I focused on personal fears that never quite made sense. Of course, not making sensing never stopped some of them from scaring me.

August 8 – Decided to organize an event. Since my husband and I moved about an hour north of where he is from, it’s been much harder for him to keep in touch with his friends. So I made it my mission to get over my fear of calling people I hardly ever know to invite them over to a surprise party for the husband. For some reason, I had a huge fear that I would announce myself as Brian’s wife on the phone and his friends would just hang up on me. (This post is late because his birthday was on the 17th and I didn’t want my husband to read about the surprise on the blog.) 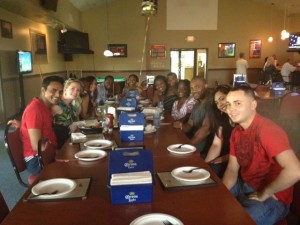 The surprise get together was a success!

August 9 – Attempted to make a new friend. As stated above, since moving it’s been much harder to connect and make new friends in the area. Most people in the town seem to keep to themselves. However, you obviously don’t make new friends if you don’t make the effort. We had a new neighbor move in a few weeks ago and I’ve wanted to knock on her door for a while. However, my fear of looking like the crazy, stalker in the neighborhood stopped me. On this particular day, I realized how foolish it was to think the new neighbor would assume I was crazy for simply introducing myself. As a result, I marched upstairs rang the doorbell and officially welcomed her to the neighborhood. She was very receptive. We may not be new friends yet, but at least we are now acquaintances.

August 10 – Asked for help. I am an extremely stubborn person. I hate asking for help because I want to prove to myself that I can do it on my own. Plus, I always feel like a burden when asking for favors or help of any kind. I put my stubborn nature aside and asked my in-laws for help with something personal. I was so happy when I learned that she was thrilled that I even asked for help. She was able to feel needed and I was able to fix an issue with ease. Most importantly, I learned that my parents were right when they said part of being a leader is knowing when to ask for help. I’m so glad that I did.

August 11 – Granted an interview. Despite having conducted many interviews for my own articles I’ve never actually allowed people to interview me for their own. Despite my love of talking, I’ve always had this fear of sounding like an idiot. And then there’s my need to be extremely private. I quickly got over that fear when my former internship supervisor approached me asking for a quote for her very personal article to appear in Self. Despite my fear of being embarrassed and judged, I candidly answered the question to which she seemed extremely appreciative of. I learned that not everyone is as quick to judge those awkward moments as I thought.

August 12 – Reached out to a lawyer. Again, having been afraid to be laughed at from looking like an idiot I’ve been fearful of reaching out to a lawyer about an issue in my lease. After all, lawyers can be very intimidating. I can’t comment on it here as the issue is still in progress. However, I’m pleased to say that the turnout wasn’t what I expected.

August 13 – Ran to polls in the dark. It was 7:34 when I realized I hadn’t voted in the state primaries for Senate. However, my husband had the car so I couldn’t drive. I had the option of not voting or running the two miles in the dark to vote. I was a bit nervous considering it was dark outside and there are no sidewalks so my safety was of concern. Obviously, I ignored those concern and made the run anyway. Though I was able to vote and made it back home safely, I’m wondering if this was one time that I should have listened to my fear. I live in a relatively small and quite town, but I can’t help but think that running alone for two miles was dangerous. I can’t say I’ll ever do it again, but I’m glad I took the risk and made it him safely.

August 14 – Reached out to an old friend. My best friend and I have drifted apart and it hurts. I’ve been feeling tension between us and I haven’t been sure how to handle it. Today, I decided to bite the bullet and confront her about it with a phone call. While she didn’t answer, I did leave a voicemail. The phone call wasn’t as scary as  I thought considering she didn’t answer, but now I’ve been sitting on edge wondering if she will call me back and thinking about how the conversation will go.