I absolutely hate driving. I despite it. It’s frustrating and honestly, I don’t think I’m a very good driver so I usually avoid driving when I can. But this week, I faced the fear three times!

September 19: Reconnected with old friends. Have you ever lost touch with old friends years earlier and wondered how they are doing now? Well, that’s what happens to me fairly frequently. However, I never do anything about it out of fear I’ll look strange for reaching out after so long. This time  I decided to push that fear aside and initiate talks for a get together. So I set out on Facebook and messaged my four old friends after a year of not speaking for a meetup. They all obliged and we’ll all be meeting at a popular restaurant in New Brunswick. I guess nobody thought  I was weird for initiating the reunion.

September 20: Took the turnpike. This sounds silly, but I’m afraid of the NJ Turnpike. Whenever I have to drive anywhere far, I would either take 295, Route 1 or some other highway. The NJ Turnpike is so intimidating. Everyone drives so fast and it only forces you to drive faster if you want to avoid causing an accident. Well, I’m proud to admit that I drove on the Turnpike for three whole exists and got to my destination safely. I still don’t like the Turnpike, but maybe it’s not as scary as I make it out to be.

September 21: Traveled on a dark road. I’ve said it once before, but I hate traveling on dark roads at night. It’s impossible to see with no street lights. But for some reason, I decided to test my luck and push my fear to the max by venturing onto a dark road at 11:00 pm. Big mistake. Not only was it harder to drive, because there are less cars to follow at that time of night, but there was also a downpour of blinding rain. I was so panicked I had to talk to my husband on the phone while I drove to calm me down. The rain was so blinding that I couldn’t see the road for my exit and almost hit the sign. Luckily, I made it back home with no incidents. However, I will never drive on a dark road late at night when it’s raining again. I think is one fear worth having.

September 22: Ran a 5k. Remember a few weeks ago when I mentioned signing up to run a 5k for the March of Dimes? Well, I 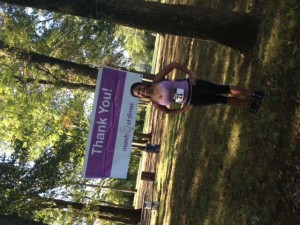 almost chickened out. First, I never finished my training, secondly my husband was traveling on business so I had no support system with me, and third I am a runner by no means. But I took the plunge and decided to do it. I was so afraid of making a fool out myself in comparison to all the other veteran runners. However, I made myself proud. I didn’t come in last and jogged the whole thing in 37 minutes. It felt absolutely amazing to conquer this fear and follow through.

September 23: Tweeted a celebrity. Well, I tweeted a celebrity, by the name of Kelly Ripa. On Live with Kelly and Michael this morning she discussed how she doesn’t follow enough people on Twitter. So I thought it was the perfect time to get my first follow from a celebrity. Of course, I was afraid of looking like an idiot in front millions of Twitter participants and the famous, Kelly Ripa.  But I decided to suck it up and try it anyway in the hopes she’ll follow me back. It’s been a few hours with no follow from her, but I’ll be paying attention to see if I’ll catch her eye. At least, I haven’t been ridiculed about it by anyone.

September 24: Emailed my writing idols. Asking for help is never easy; especially when requesting it from people you idolize. But that’s exactly what I did, when I needed some help for a story I was writing. It was intimidating to ask them considering their experience level and expertise in comparison to mine. However, they were extremely receptive and helpful to my questions. Just goes to show that if you don’t ask, you get nothing. Fear averted!

September 25: Took new directions to a location. I am horrible with directions and hate getting lost. As a result, I rarely find shortcuts to anything. If traffic is backed up on the highway for 30 minutes I rarely try to find a way to avert it due to fear of getting lost. That’s why it was a big deal when I decided to take backroads to an event I was speaking at almost an hour away from where I live. Well, while I didn’t get lost I did have difficulty finding the building but it wasn’t anything that a quick call to the location couldn’t fix. HOnestly, I think it may be the first time I’ve followed directions I wasn’t familiar with and didn’t take a wrong turn anywhere!

Highlight of the week? Participating in my first 5k. Have you ever done a 5k before?