Repeat after me: I’m here because I deserve to be.

If you follow me on Instagram, you probably know that I had the pleasure of participating in the National Publicity Summit in NYC as a member of the media. What you didn’t know was I was scared silly.

The National Publicity Summit is a weekend event where doctors, business owners, authors and more attend to learn about getting published and receiving press in several publications from people in the media themselves (a.k.a. me). Media professionals sit on a panel and answer questions attendees have about getting published. These attendees surely got their money’s worth because sitting on the side of media professionals were people who have worked for NY Times, CBS, ABC, Parade, youtube channels with hundreds of thousands subscribers, television producers and more.

If you are constantly doubting yourself and wondering how you get there, you probably have Imposter Syndrome. The struggle is real and more common than you think

And then there was me. Boy did I feel like I dropped the ball. Up until the day of the event, I was convinced my invitation was a mistake and it was meant for someone else. There was no way my experience was on par with the others on the panel. And I felt like everyone knew it. The moment I opened my mouth everyone would know I was a fraud – at least that’s how I felt. I had a classic case of imposter syndrome. I felt even worse once I learned how accomplished the attendees were. One attendee hoping to learn from the media was a women who’s toddler was abducted in 90’s, wrote book about it and travels the world helping people cope with loss. Another was a female producer who created a documentary about the heart behind professional athletes and won several awards for it. To say the talent pool was overwhelming is an understatement.

After recognizing the talent of the attendees while sitting amongst such accomplished media professionals I was convinced I wouldn’t be able to bring anything of value. Of course, I realized I was focusing on the wrong things. I was only thinking about my perceived short comings instead of actually bringing value to the panel. And sure, I wasn’t an expert on getting published but that was no reason to stop me from saying what I could and be honest about what I didn’t know. So I did what any good aspiring artist would do. I faked it. 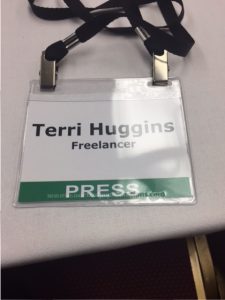 Things suddenly got real very quickly the moment I received this.

When they asked questions about how to get a journalist’s attention I mustered up the best answer I could think of and pretended to know what I was talking about. When a few asked about follow up procedures, I responded with what I thought were the correct answers based on personal experiences and nailed my “faked put together” persona.  I was asked what my biggest pet peeve was when receiving pitches and did my best to appear witty, relatable, yet professional as I told them to never misspell my name. At the end of the night, I felt as though I made out like a bandit  because no one figured out I was a fraud. Attendees clapped, smiled, laughed at my joke and even asked to follow up with me in the future to gain further perspective. I really had them fooled. They ACTUALLY fell for my act and wanted to hear more about my professional experience.

Of course, the joke was on me because I truly did believe and experience the things I mentioned. After further thought, I realized I didn’t tell a single lie and didn’t say anything that was out of the ordinary for me. On that train ride home it had me realizing that maybe I wasn’t a fraud after all. From that experience, I’ve gathered a few methods for dealing with imposter syndrome since I’m sure it will strike again.

In my case, imposter syndrome stemmed from comparing myself to the accomplishments of others. However, I failed to realize that I wasn’t there to be just like the other panelists or beat them. I was there because the organizer thought there was something only I could offer. I had to ignore the praises of other people and learn to accept my own praises. Your experiences may not be like anyone elses, but they don’t need to be.

So I’m a bit ashamed to admit this, but this wasn’t the first time I was invited to speak at this event. They had invited me to another one previously which I rejected because I felt I wasn’t good enough back then either. The second time around I figured, “Why not?” but as you know I quickly regretted it because I still felt like a fraud. It took me a while to realize that I wasn’t giving myself any credit. These people invited  me to the event more the once. I must have done something right. So maybe I hadn’t worked with the NY Times, but I have written for other well known magazines. That had to count for something. The organizers clearly saw something special in me. It’s time I see it in myself.

Though I felt like I didn’t belong at the National Publicity Summit, I did my best to bring something of value.

As bad as it sounds, imposter syndrome is a selfish thing. Sufferers keep saying things such as “I’m not good enough.” I can’t do that” or “What if they find me out?” All of those thoughts are about you. They are selfish thoughts. Instead take the pressure off yourself and sincerely try to help others the best way you know how. You may not have all the answers but you do bring something of value. Show them what that is and it might help someone. Otherwise, you’d be robbing the world of all you have to offer.

When I was as the publicity summit, I was swimming in a sea filled with doctors, authors, lawyers and more. It was certainly very intimidating. However, once I started to look past the credentials to see the person behind them, I felt more at ease. It’s time to recognize credentials for what they are – a labeling game that doesn’t always mean much. An expert doesn’t always know more than you. It might mean they went to school for a long time. And it certainly doesn’t make them any less human. Once you ignore the credentials you might find out you are certainly on par with the person who once intimidated you.

So even though I knew I didn’t belong at the event, I decided the best thing I could do was pretend that I did belong. I did my best to smile, node and answer questions as matter-factly as possible. Turns out no one could tell I was faking it including me.

Have you ever struggled with Imposter Syndrome? How did you handle it?

TERRIfic Words : No one has all the answers, but that shouldn’t stop us from giving a try.