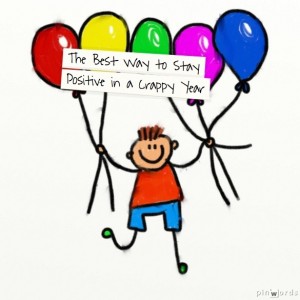 I’m not going to lie. Despite declaring that 2014 was going to be the most amazing year ever, it wasn’t. As a matter of fact, it was a pretty crappy year for my family. Normally, I’m one of the biggest proponents of claiming the good fortune you seek. However, last year reality proved that it’s not always possible. While my family and I tried to stay positive and claim the amazing year we felt we deserved, it turned out to be the complete opposite. I’d go as far as saying it was probably one of the worst years I’ve experienced in a long time.

All year, I’ve dealt with or witnessed people close to me dealing with job loss, miscarriages, business failure, death, car accidents, rejection and severe illness. And these weren’t just one time situations. It kept happening throughout the entire year…. There was barely any time in between each incident for recovery. If it wasn’t one thing it was another. These downward spirals were continuously thrown at me. So can you blame me for saying that 2014 was absolutely horrible?

Yes, I know the fact that I managed to wake each morning with a roof over my head was enough to make 2014 a fortunate year. I know a few people who weren’t that lucky. But a person can only take so much. It’s only a matter of time until you get depressed and begin to give up all hope .However, being the stubborn person I am, I wasn’t going to let that happen. I tried everything possible to lift my spirits and stay positive during the trying year.

Of course, I consulted my trusty list of fun and quirky ways to be happier, played with some play-doh, took lots of showers, worked out and even spent some time with family. While engaging in those activities helped lift my spirits, the feeling never lasted as long as I had hoped. In fact, the positivity quickly waned as soon as another unfortunate incident presented itself.

Only one thing seemed to work in terms of staying positive and it was the most unlikely thing I would imagine. The negativity and depression of other people. But not just any people – my family and friends. How many times have you heard that in order to remain positive you should try to distance yourself from negative people? “You are the company you keep,” they say. For the most part, I’ve found that to be true. After all, another person’s negative attitude can certainly be contagious – not to mention extremely draining to deal with.

But it’s not always easy to distance yourself from negativity when it’s from the people you love the most. Rather than distancing yourself from them, you find yourself drawing near and wanting to wallow with them. Generally, hugging, sympathizing and sharing tears with one another seemed to be good therapy. However, much to my surprise the tears always seem to dry out enough to see the pain and suffering of that special person. And once you see that broken spirit, you want nothing more than to restore the smile and faith in your friend despite the pain you feel.

At that moment, you make it your mission to cheer up your depressed friend by any means possible. If you are anything like me,  it means a random tickle fight or breaking out into a dance off. The tears dry up, the personal issues are disguised,  the fake smile appears and you muster the strength to laugh even though you a plagued by weakness and sorrow. And then something unimaginable happens. You’ve gone from trying to cheer up a dear friend to genuinely cheering up yourself. Throughout my treacherous 2014, it never failed. Time and time again when I was faced with hardship and misery it always seemed to disappear once I encountered a friend who was just as down as I who was in desperate need of cheering up. Why?

As Mark Twain once said, “The best way to cheer yourself up is to cheer someone else up.” After all, those good feelings you try to transpose onto someone else are surely contagious. No matter how much you’d rather be selfish, wallow in your self pity and turn your back on the world when experiencing hard times, the desire to be needed and lend a helping hand somehow turns out to be greater. So I say, put away the play-doh, turn off the romantic comedy and cease all tickle fights with yourself. If you are truly seeking away to lift your spirits during a rotten year, find a downtrodden soul needing spirits lifted just as much as you do. You both will surely reap the benefits.

What have you found to be the best method for cheering up? Have you “accidentally” cheered yourself up when trying to make someone else happy?

TERRIfic Quip: Life is too short to be miserable. If you can’t laugh at yourself, call me and I’ll laugh at you!