I don’t say I hate things a lot, but I HATE Facebook. However, judging by the post I wrote on 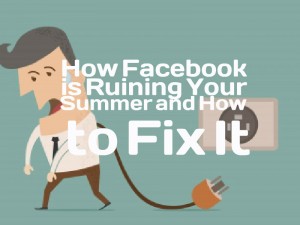 it a few months ago and the amount of times I log onto it every day, you’ll never know it. As annoying as it is, there’s something about seeing the messy posts your ‘friends” make about their crappy boyfriends, horrible jobs  and struggle with loans. On the other side, it can be somewhat depressing to learn of a “friend” who just bought a house while I’m still managing to deal with my student loan debt. And no matter how often I complain about it, I still manage to find myself glued to Facebook rather than connecting with friends, family, business partners or the great outdoors.

If it’s not Facebook, it’s Twitter, Pinterest or Instagram. Is it time consuming? Yes it is. But every time I questioned it, I reminded myself that it’s my job to be connected.  It wasn’t until recently that I realized that was a bunch of crap. Sure my job is to stay connected, but is being attached to my iPhone, Facebook, Twitter, Gmail, Pinterest and my tablet helping me do that?

Judging by the amount of times I’ve had to decline in-person networking events because of the amount of emails I had to read or the countless number of ignored  press event invitations because of the need to  “live-tweet”  a Twit chat, I would think not. Just because “connection” is only a few clicks away and only requires I be behind a screen doesn’t mean I’m connected. In fact, other than their font of choice, I’m convinced I don’t know these people at all.

That’s why it only makes sense for me to unplug and disconnect for the summer. Starting July 1st, I am disconnecting from Facebook so I can focus on developing true connections rather than the artificial ones that we’ve become accustom to. I want to remember what it’s like to make a client laugh when discussing similar work stressors over lunch. I want to remember what it’s like to breathe in fresh summer air. Most importantly, I want to revisit the tingly feeling I get when recognizing that I’ve built more than just a business partnership, but a relationship. Unfortunately, I’ve found that it’s not possible for me to experience any of these things when dealing with the urge to be plugged to all things social media and technology. My guess is you can’t either.

If you are anything like me, you’re probably shaking your head in disagreement because you are such a fabulous multitasking-pro who has no problems plugging into the real world and technology. Don’t believe me? When was the last time you were able to engage fully on Facebook providing meaningful responses while being completely present in your family’s life? How about the last time you had no issue ignoring the email notification or Facebook alert on your phone while on a lunch date with your spouse? I’m willing to bet you weren’t as present in either situation as you would like. You might even say you were disconnected.

The truth is our brains are exhausted from attempting to doing it all. We’ve over exerted ourselves trying to be inclusive online that we’ve gone M.I.A in other areas of our lives making us miss out on true connections. I say it’s time for us to take a rest for the summer.

Deactivate Facebook, put down the smartphone and limit your time on email so you can truly connect. We won’t be able to truly plug into to people, nature, passion and summer unless we learn to unplug from the things that has taken over so much over lives.

If unplugging for the summer sounds hard, try unplugging for an hour or even one day. You might be amazed with the change you’ll experience. Disconnecting might even make you happier, less stressed, a better employee and more positive and a networking machine. After all there’s more to life than recognizing a carefully selected profile picture and concocting Facebook statuses to earn hundreds of likes. And if you are worried about all the drama you’ll be missing from high school friends, think about how happy you’ll be when you’re electric or phone bill is much lower due to decrease in data and electricity usage.

Do you think you’ve missed out on a lot by living in connectivity? How do you plan to fully plug into the summer?

TERRIfic Quip: Sometimes it takes losing yourself in to really find yourself again.