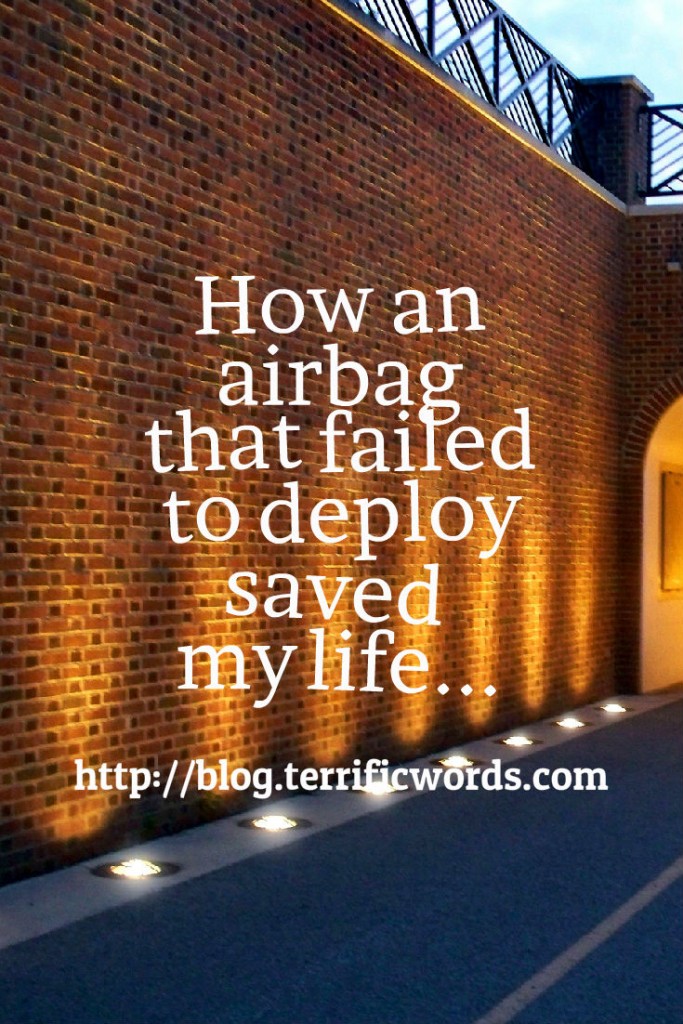 28 days. That’s how long it lasted. No – that’s not the length of my menstrual cycle. I’m talking about the tragic death of my car after 28 days. It wasn’t my dream car but it served it’s purpose. And after a bout of bad luck when it came to cars (we had two cars die on us within 6 months), this new one was God sent. It wasn’t brand new, but it was new to us. In fact, other than being a year newer, it was almost identical to my husband’s pride and joy that had died the month prior. The only difference was that this car, though a 2002, was in pristine condition. It was well maintained and had no issues. And all for a great price, thanks to the family friend who sold it to us.

My husband and I felt like we were on cloud nine to have lucked out with such a reliable car. In fact, after the year we had and all the issues we had with our other cars it was amazing that the universe had even trusted us with a car again.

That amazing feeling continued one faithful night on my drive home. That Thursday night as I drove home from my Zumba class, I thought about how lucky we were, the fabulous Zumba class I had, life insurance and the amazing shrimp scampi my husband had waiting for me at home.

And then suddenly our good luck ran out. I was three minutes away from home when the bad luck hit me like a ton of bricks. Actually, it was more like a ton of car as that SUV crashed right in to my defenseless Infiniti.

Unable to open the stuck door, I sat in the middle of the intersection motionless looking around me. All I could see was glass in the middle of the road, the car that struck me and chaos. Shortly after the police and ambulance came and they quickly whisked me away to the hospital.

As I spoke to the EMT, they asked if the airbags deployed. I told them that all but the one in the wheel deployed – which I was surprised about it. How could a car that I once deemed so pristine and perfect not deploy the airbag in the driver seat? That could mean life or death had it been a more destructive accident. Though, I was ok I was a bit upset about it. 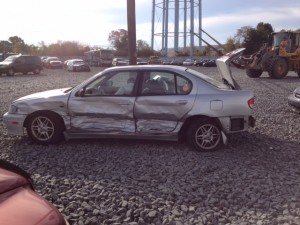 The aftermath of my car being hit by someone who ran a red light.

When I got back home that night to my now cold shrimp scampi, I told my husband about the airbag that failed to deploy. I felt like I was lied to in thinking the car was safe. How could the car be safe when the driver side airbag never expanded? Isn’t that one of the main features used in determining a cars safety?

Much to my surprise, my husband said, “I’m happy the airbag didn’t deploy. You may have been hurt or not even here now if it did.” Of course, I was confused at first but the more I  thought about it, the more I realized he was right.

Being a petite girl of barely 5’0″, I find it difficult to see over the steering wheel. As a matter of fact, I was the girl who argued with people who made fun of me for having the seat close to the steering wheel maintaining that I wouldn’t be able to see if it wasn’t. ( I know I can’t be the only short girl to do this.) Each time I drove several who picked a fight would tell me I could hurt myself if ever in accident with the seat that close. And my hardheaded self would always argue that having the seat further back would result in an accident if I couldn’t see where I was driving.

Boy was I proven wrong the night of that accident. As usual my seat was extremely close to the steering wheel that night. Perhaps, if the airbag did deploy I wouldn’t have been able to walk away unscathed. Or even worse, I could be dead. 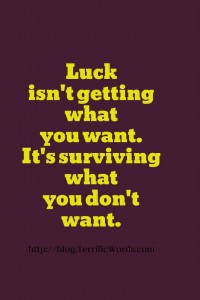 The truth about luck no one tells you.

Rather than being mad for believing the car was “safe” when it wasn’t due to a defective air bag, I was pleased to realize that the car was safer than I thought when it spared me my life. And just like that, it dawned on me that our good luck didn’t end when I got in the accident. On the contrary, our good luck was just beginning. And it was all because that airbag failed to deploy and saved my life.

Since that faithful day when I was able to walk away from the accident scene with my limbs and sanity intact, I’ve vowed to live without hate, without fear and without pain. I’ve been able to chase and vow to tackle the dreams I’ve put on hold. Each day, I wake up with purpose and love in my heart as I do all I can to be better than I was yesterday. Most importantly, I keep my seat a bit further away from the steering wheel to protect myself from airbags that actually work and thank god for my good luck that morning.

And to think, it’s all thanks to an airbag that failed to deploy. Turns out there’s no such things as good or bad luck. It all depends on what you choose to make of it. (I was still pissed about having to buy a new car though.)


There's no such things as good or bad luck. It all depends on what you choose to make of it. Click To Tweet

Isn’t it funny how an accident can change your whole perspective? Have you ever been in an accident? Did it change anything in your daily life?